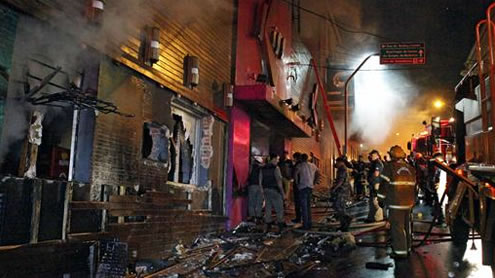 SANTA MARIA, Brazil – A nightclub fire killed at least 233 people in southern Brazil on Sunday when a band’s pyrotechnics show set the building ablaze and fleeing partygoers stampeded toward blocked exits in the ensuing panic.

Most of those who died were suffocated by toxic fumes that rapidly filled the crowded club after sparks from pyrotechnics used by the band for visual effects set fire to soundproofing on the ceiling, local fire officials said. “Smoke filled the place instantly, the heat became unbearable,” survivor Murilo Tiescher, a medical student, told GloboNews TV. “People could not find the only exit. They went to the toilet thinking it was the exit and many died there.”

Firemen said one exit was locked and that club bouncers, who at first thought those fleeing were trying to skip out on bar tabs, initially blocked patrons from leaving. The security staff relented only when they saw flames engulfing the ceiling. The tragedy in the university town of Santa Maria in one of Brazil’s most prosperous states comes as the country scrambles to improve safety, security and logistical shortfalls before the 2014 World Cup soccer tournament and the 2016 Olympics, both intended to showcase the economic advances and first-world ambitions of Latin America’s largest nation.

In Santa Maria, a city of more than 275,000 people, rescue workers and weary officials wept alongside family and friends of the victims at a gymnasium being used as a makeshift morgue. “It’s the saddest, saddest day of my life,” said Neusa Soares, the mother of one of those killed, 22-year-old Viviane Tolio Soares. “I never thought I would have to live to see my girl go away.” President Dilma Rousseff cut short an official visit to Chile and flew to Santa Maria, where she wept as she spoke to relatives of the victims, most of whom were university students. “All I can say at the moment is that my feelings are of deep sorrow,” said Rousseff, who began her political career in Rio Grande do Sul, the state where the fire occurred. It was the deadliest nightclub fire since 309 people died in a discotheque blaze in China in 2000 and Brazil’s worst fire at an entertainment venue since a disgruntled employee set fire to a circus in 1961, killing well over 300 people.

‘BARRIER OF THE DEAD’

Local authorities said 120 men and 113 women died in the fire, and 92 people are still being treated in hospitals. News of the fire broke on Sunday morning, when local news broadcast images of shocked people outside the nightclub called Boate Kiss. Gradually, grisly details emerged. “We ran into a barrier of the dead at the exit,” Colonel Guido Pedroso de Melo, commander of the fire brigade in Rio Grande do Sul, said of the scene that firefighters found on arrival. “We had to clear a path to get to the rest of those that were inside.” Pedroso de Melo said the popular nightclub was overcrowded with 1,500 people packed inside and they could not exit fast.

“Security guards blocked their exit and did not allow them to leave quickly. That caused panic,” he said. The fire chief said the club was authorized to be open, though its permit was in the process of being renewed. But he pointed to several egregious safety violations – from the flare that went off during the show to the locked door that kept people from getting out. “The problem was the use of pyrotechnics, which is not permitted,” Pedroso de Melo said.

The club’s management said in a statement that its staff was trained and prepared to deal with any emergency. It said it would help authorities with their investigation. One of the club’s owners has surrendered to police for questioning, GloboNews TV reported. When the fire began at about 2:30 a.m., many revelers were unable to find their way out in the chaos. “It all happened so fast,” survivor Taynne Vendrusculo told GloboNews TV. “Both the panic and the fire spread rapidly, in seconds.”

Once security guards realized the building was on fire, they tried in vain to control the blaze with a fire extinguisher, according to a televised interview with one of the guards, Rodrigo Moura. He said patrons were trampled as they rushed for the doors, describing it as “a horror film.” Band member Rodrigo Martins said the fire started after the fourth or fifth song and the extinguisher did not work. “It could have been a short circuit, there were many cables there,” Martins told Porto Alegre’s Radio Gaucha station. He said there was only one door and it was locked. A band member died in the fire.

TV footage showed people sobbing outside the club before dawn, while shirtless firefighters used sledge hammers and axes to knock down an exterior wall to open up an exit. Rescue officials moved the bodies to the local gym and separated them by gender. Male victims were easier to identify because most had identification on them, unlike the women, whose purses were left scattered in the devastated nightclub. Piles of shoes remained in the burnt-out club, along with tufts of hair pulled out by people fleeing desperately. Firemen who removed bodies said victims’ cell phones were still ringing. The disaster recalls other incidents including a 2003 fire at a nightclub in West Warwick, Rhode Island, that killed 100 people, and a Buenos Aires nightclub blaze in 2004 that killed nearly 200. In both incidents, a band or members of the audience ignited fires that set the establishment ablaze.

The Rhode Island fire shocked local and federal officials because of the rarity of such incidents in the United States, where enforcement of safety codes is considered relatively strict. After the Buenos Aires blaze, Argentine officials closed many nightclubs and other venues and ultimately forced the city’s mayor from office because of poor oversight of municipal codes. The fire early on Sunday occurred in one of the wealthiest, most industrious and culturally distinct regions of Brazil. Santa Maria is about 186 miles west of Porto Alegre, the capital of a state settled by Germans and other immigrants from northern Europe.

Local clichés paint the region as stricter and more organized than the rest of Brazil, where most residents are a mix descended from native tribes, Portuguese colonists, African slaves, and later influxes of immigrants from southern Europe. Rio Grande do Sul state’s health secretary, Ciro Simoni, said emergency medical supplies from all over the state were being sent to the scene. States from all over Brazil offered support, and messages of sympathy poured in from foreign leaders. (Additional reporting by Guillermo Parra-Bernal, Gustavo Bonato, Jeferson Ribeiro, Eduardo Simões, Brian Winter and Guido Nejamkis.; Writing by Paulo Prada and Anthony Boadle; Editing by Todd Benson, Kieran Murray and Christopher Wilson) – Yahoo