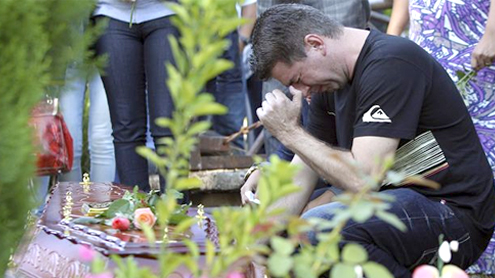 Police in Brazil have arrested four people in connection with a nightclub fire that killed 231 people early Sunday.

Two club owners and two members of the band that was playing when the blaze broke out are in police custody.  The fire quickly swept through the Kiss nightclub in Santa Maria, in the far south of the country, trapping people who fled to the only unlocked exit.  Most of the victims died from smoke inhalation or were trampled.  More than 100 people were injured.

The club was filled with university students.  Survivors say a band member shot fireworks toward the ceiling, triggering the blaze that engulfed the building.Family members have begun the grim task of burying their loved ones.As the country mourns, Brazil canceled an event scheduled for Monday in the capital, Brasilia, marking the 500-day countdown to its hosting of the 2014 World Cup.

The disaster comes at a time Brazil is trying to show the rest of the world it is prepared to host next year’s World Cup and the 2016 Summer Olympics. Brazilian President Dilma Rousseff cut short a visit to Chile early Sunday to return home. Santa Maria is a major university city with a population of about 250,000, located near the borders with Argentina and Uruguay.The fire is among the deadliest in a nightclub.  A blaze in China in 2000 killed 309 people and one in Argentina in 2004 killed 194. – VOA

SC registrar made over Rs 7m from investments in Bahria Town

SC registrar made over Rs 7m from investments in Bahria Town