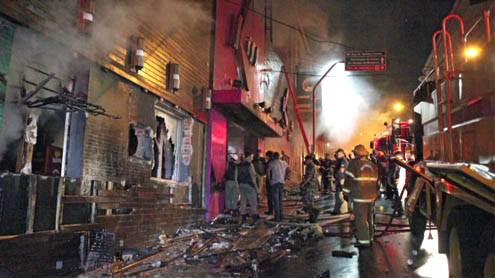 Brazil:  One of the owners of the Brazilian nightclub that burned down this week, killing 235, tried to take his own life while in custody, police said Wednesday.

Elissandro Spohr is one of four arrested in the aftermath of Sunday’s deadly blaze at the Kiss nightclub in Santa Maria, Brazil.The suicide attempt happened while he was interned and under police guard at a hospital, where he is being treated for smoke inhalation, Santa Maria Police Chief Lylian Carus said.Brazil club survivor remembers the man who saved her life.While taking a shower, Spohr removed the shower hose and tied it to a window, but police discovered him before he placed the other end around his neck, Carus said.

what is saraswati puja”Everything indicates he was going to commit suicide by hanging,” she said. “He’s emotionally destroyed.”The residents of Santa Maria, in southern Brazil, have also suffered an emotional toll from the tragedy.It seems to be all that people in the town talk about, and protestors have taken to the streets demanding justice.In addition to Spohr, police arrested another owner of the club, Mauro Hoffman. Also in custody are the vocalist for the band performing that night, Marcelo de Jesus dos Santos, and show producer Luciano Bonilha.

During their performance, the band Gurizada Fandangueira used pyrotechnics that they knew were for outdoor use only, police have said. They opted to buy this particular firework because it was cheaper than the indoor-use kind, police said.Brazil nightclub fire: ‘Like a war zone’ with bodies piled.Kiss was filled well beyond its legal capacity with the crowd of 2,000 people, who packed the club to hear the band play.When the pyrotechnics were set off, the ceiling caught fire, state officials said, and the flames spread quickly.

The crowd panicked, breaking into a stampede, and it hit a bottleneck — the only exit was the front door, down a dark, narrow hallway.More than 100 of the victims were students at the local Federal University of Santa Maria, the school said.In addition to the ongoing criminal investigation, Santa Maria’s public prosecutor announced that there will be a separate investigation to establish civil liability.

“The introduction of the civil investigation allows us to request documents and produce evidence to establish that kind of responsibility,” public prosecutor Cesar Carlan said, according to state media. “We are, at this moment, watching the police work, where the evidence produced will be useful for our own inquiry.”In the days after the fire, about 20 more people who were at the club sought health services because of symptoms such as tiredness and breathlessness, Brazil’s state-run Agencia Brasil news agency reported.

These new patients were hospitalized for observation and may require breathing aids.Some 82 people remained in intensive care units, with 75 in critical condition, health officials said.Investigators said they found evidence of faulty and fake fire extinguishers at the club, which had expired fire and municipal licenses. The club’s original license permitted just 691 people inside.However, fire officials said that because the club was in the process of renewing its license, it was not required to be shut down.

Last September, the fire department notified the owners of the club about their expired permit, and in November, the club requested inspection for a renewal, fire official Sergio Roberto de Abreu said, according to Agencia Brasil.The renewal request was pending at the time of the fire.A lawyer for Spohr, the owner, not only said the club was operating legally, but also blamed the fire department for the mass casualties.”It was a disastrous and poor operation by the fire department,” attorney Jader Marques said, according to Agencia Brasil.The firefighters weren’t wearing proper masks and lacked proper equipment, he said. “Worse than that, the firefighters, feeling powerless, used civilians” to assist in the rescue. – CNN