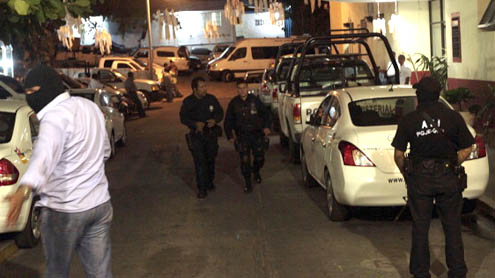 Six Spanish tourists have been raped near the Mexican resort of Acapulco, local authorities say.

Several armed masked men entered a building where the women were sleeping, and attacked them after tying up other people staying there, police said.The tourists had been staying in small shacks on Playa Bonfil.The BBC’s Will Grant in Mexico says it is one of the worst cases of sexual violence against tourists in the country in recent years.Police quickly sealed off the scene following the attack which happened in the early hours on Monday, south of Acapulco.

Local media reported that several other people in the same group, including a Mexican woman, had been tied up and gagged while the attack took place.After the ordeal the women went to the nearest police station accompanied by local tourism officials.Violence is common in the state of Guerrero, our correspondent says, although Acapulco and its surrounding beaches are generally thought to be safe.

However, several powerful drug cartels operate in the mountains of the state, particularly the Familia Michoacana and their rivals, los Caballeros Templarios.There are also numerous criminal gangs involved in lower level drug trafficking and violence, our correspondent adds.  – BBC