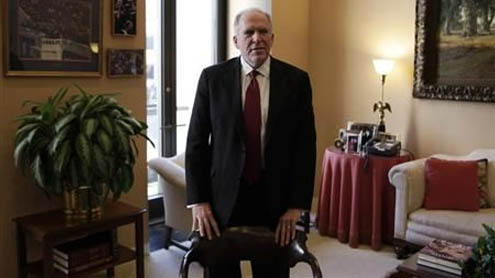 WASHINGTON: President Barack Obama’s nominee to head the CIA, John Brennan, is expected to face tough questioning about leaks of sensitive information and U.S. spy activities from water boarding to the use of drones when he appears at a Senate confirmation hearing on Thursday.

President Barack Obama, on the eve of the hearing, directed the Justice Department to provide congressional intelligence committees access to a classified opinion laying out the legal basis for armed drone strikes on U.S. citizens alleged to be involved in terrorist plots, an administration official said.The White House had previously resisted taking this action, angering lawmakers including Senator Dianne Feinstein who chairs the Senate Intelligence Committee, which is holding the hearing.

In a written submission posted on the Senate Intelligence Committee’s website on Wednesday, Brennan acknowledged for the first time that he had given voluntary interviews in connection with investigations into leaks that are being conducted by federal prosecutors in Baltimore and Washington.Brennan said the investigations related to cyber warfare against Iran and a foiled bomb plot tied to al Qaeda’s Yemen-based affiliate. Brennan said his lawyer had been told by prosecutors that he was “only a witness” in both investigations.

However, leaks are only one of the major issues about which intelligence committee members plan to question Brennan, a former CIA executive under President George W. Bush, who has become the steward of Obama’s drone policies.Congressional aides said much of the questioning is expected to focus on what Brennan knew about the Bush administration’s use of harsh interrogation techniques on Islamic militant suspects captured and held, sometimes in secret CIA prisons, after the September 11 attacks on the United States in 2001.Human rights activists and many U.S. politicians, including Feinstein and Republican Senator John McCain, have condemned some of these interrogation techniques as torture.

Despite the range of expected questions, Senate aides and political handicappers say they have not sensed a groundswell of opposition to Brennan’s nomination.Brennan first surfaced as an Obama CIA nominee in 2008 but he withdrew after human rights activists protested his equivocal public statements regarding the agency’s use of so-called enhanced interrogation techniques, including waterboarding.This time human rights groups have raised questions about Brennan, but opposition has come nowhere close to the level mounted by conservative and pro-Israel groups against Chuck Hagel, Obama’s nominee to replace Leon Panetta at the Pentagon.

Brennan’s knowledge of extreme interrogation techniques is likely to provoke intense committee questioning.As Reuters reported earlier this month based on sources, classified CIA message traffic shows that Brennan had detailed, contemporaneous knowledge of the CIA’s use of “enhanced interrogation techniques,” including waterboarding, which induces a feeling of drowning.

After he temporarily left government service in 2005, Brennan publicly renounced waterboarding and other physically painful interrogation techniques. He and other Obama administration officials have said Brennan also objected privately to fellow intelligence officers about the use of the techniques.Former Bush administration officials involved in the program say they do not recall such objections.

In his written submissions to the Senate committee, Brennan declared that he had “significant concerns and personal objections to many elements of the EIT (enhanced interrogation technique)” program while it was under way.”I voiced those objections privately with colleagues at the agency,” Brennan continued, adding: “When I left the agency, I spoke publicly about those concerns.”

He maintained that after being named White House counter-terrorism advisor, “I was put in a position to influence decisions related to EITS, such as how we handle interrogations, and I strongly support the president’s ban on such techniques.”The CIA, which under Bush ran a network of secret prisons overseas where many of the interrogations were conducted, was now “out of the detention business and it should stay that way.”

Obama’s decision to give lawmakers access to the classified legal opinion on drone strikes on American citizens was made “as part of the president’s ongoing commitment to consult with Congress on national security matters,” an official said.Feinstein, a California Democrat, said she was pleased at the development. “It is critical for the committee’s oversight function to fully understand the legal basis for all intelligence and counter-terrorism operations,” she said.In written submissions to the panel, Brennan said drone strikes were targeted “against specific al Qaeda terrorists in order to prevent terrorist attacks on the United States and to save American lives.” He insisted those attacks were conducted “in full compliance with the law.”

Drone strikes hit their targets with “astonishing precision” and therefore “dramatically reduce the danger to U.S. personnel and innocent civilians,” he said.In 2011, a drone strike killed U.S.-born Anwar al-Awlaki, who U.S. investigators say was a leader of al Qaeda’s Yemen-based affiliate. His 16-year-old son, also a U.S. citizen, was killed in a separate drone strike in Yemen that year.Brennan is also likely to face questions about the news leaks, which are under federal investigation, although a congressional source said no evidence has emerged yet that Brennan played a role in some of the leaks.

The U.S. attorney in Baltimore is examining leaks about the alleged role of U.S. agencies in cyber-warfare activities against Iran, including deployment of a virus known as Stuxnet.The U.S. attorney in Washington is looking into leaks which led to the premature end of an undercover operation to infiltrate al Qaeda in the Arabian Peninsula (AQAP), the militant network’s Yemen-based affiliate.The Associated Press first reported last May that the U.S. had disrupted a plot to bomb an airliner with a newly designed “underwear bomb.”

Brennan subsequently advised former U.S. counter-terrorism officials who are TV news pundits that the plot was never a serious threat because the U.S. had “inside control.”This led to a statement by one TV pundit that the United States apparently had “somebody on the inside” of the plot. Reuters later learned that British intelligence agencies helped to plant an informant in AQAP, and that their operation, in which Saudi and U.S. agencies also cooperated, had to be wound up prematurely because of leaks. – YahooNews

Closest ‘Alien Earth’ May Be 13 Light-Years Away