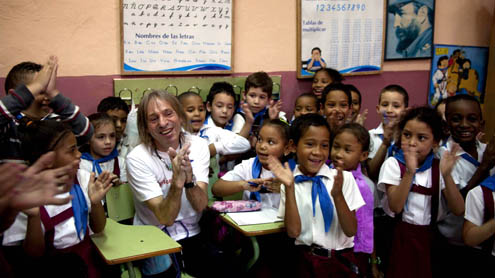 HAVANA: The French “Spider-Man” continues to dazzle Havana with his unassisted, death-defying climbs.

Alain Robert already climbed the 413-foot (216-meter) Habana Libre hotel Monday. On Tuesday it was an elementary school in colonial Old Havana that made up in difficulty what it lacked in height.The 50-year-old Robert took 15 minutes to ascend the three stories of the graceful stone building, which offered little in the way of hand- and footholds. Tourists and schoolchildren gasped and shouted words of encouragement.

Several youngsters then tried to imitate the French daredevil, but were unable to climb more than a few feet before losing their grip.Robert has scaled the planet’s loftiest skyscrapers from the Empire State Building to Dubai’s Burj Khalifa, the world’s tallest. – YhooNews