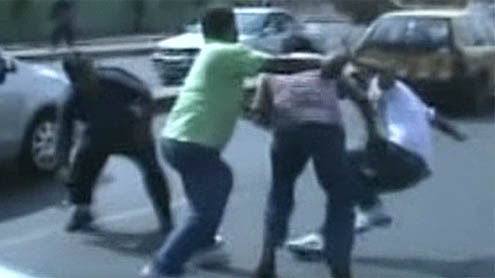 Police have caught a group of alleged thieves accused of stealing more than $46,000 since mid-January from commuters stuck in traffic in Peru’s capital city, Lima.

After weeks of undercover surveillance, agents with the Peruvian National Police surrounded the suspects Monday as they were allegedly trying to again rob people stuck in traffic in the Barrios Altos neighborhood of Lima.The group of thieves, who call themselves “Coyotes,” had been taking advantage of commuters stuck in traffic to rob them in broad daylight, police said.They seemed to primarily target taxis, but passengers in other vehicles were also robbed, they said.

“They would break the cars’ windows and try to get in like that or they would unlock the doors and attack their victims,” a police official told CNN affiliate America TV.Some of the victims would fight back and the suspects had to walk away empty-handed and in one instance, somebody started shooting a weapon straight into the air and the suspects ran away, police said.An elderly woman, who was attacked by the gang, said she tried to fight back. “I tried to hold on to my purse, but then I noticed that they were armed and let go,” the woman told America TV.

Police video handed out to media outlets shows the suspects trying to outrun police officers who were chasing them, but they were all eventually caught.One of the suspects is 23 years old and the other three are only 18, police said.They’re all being charged with armed robbery, illegal possession of a firearm and conspiracy to commit a crime.Police also said they are looking for four more suspects. – CNN