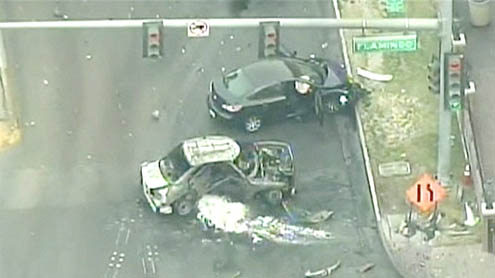 Three people have died and at least six others were injured after a “rolling” shooting and crash involving several cars in Las Vegas, police say.

Six vehicles were caught up in the crash – including a taxi that burst into flames – at a crossroads on the busy Las Vegas Strip.Police say a gunman fired shots from a Range Rover Sport at a Maserati before the Maserati hit the taxi.The Maserati driver and the taxi’s driver and a passenger were killed.A passenger from the Maserati, who suffered a minor wound to his arm, was among several others taken to hospital.The incident occurred about 04:30 local time (12:30 GMT) at the junction of Flamingo and Las Vegas boulevards, police Sgt John Sheahan said.

Officials believe an argument that began at a hotel valet area prompted the attack but were still investigating what, if any, relationship the two groups had prior to the altercation.The two vehicles were stopped at a red light when a person in the Range Rover Sport opened fire.Struck by gunfire, the Maserati’s driver then sped through the intersection and hit the taxi, which burst into flames and caused the six-car crash.The Range Rover, which was said to have large black wheel rims, had fled the scene by the time police arrived. Four casualties were taken to University Medical Center hospital, three of whom were treated and released, said a spokeswoman for the facility.

One person, whose condition was not disclosed, remained in hospital.Investigators have spoken to the authorities in three neigh bouring states in an attempt to trace the vehicle.Las Vegas Sheriff Doug Gillespie said finding the Range Rover was a top priority for his department.”This will not be tolerated,” he said at a Thursday news conference. The gunmen “will be found and they will be prosecuted to full extent of the law.”He believed the suspects to be armed and dangerous and warned people to call authorities if they spot the car, rather than approach it.The shooting and crash took place in the heart of Las Vegas’s tourist area, near some of the most famous hotels on the Strip, including the Bellagio and Caesars Palace.

British tourist Mark Thompson told the Associated Press news agency: “This doesn’t happen where we come from, not on this scale.”We get stabbings and gang violence, but this is like something out of a movie. Like Die Hard, or something.”This is the third incident of violent crime to hit the popular gambling destination this month.Two people were wounded in a shooting at a Las Vegas car park on 6 February, and a tourist was stabbed in a lift at the city’s Hotel Mandalay Bay on 16 February. – BBC