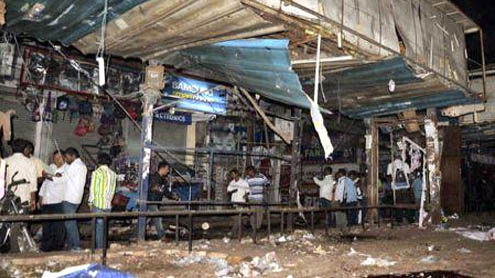 HYDERABAD: It proved to a lull before a terrifying storm. Seventeen months after the last deadly bomb blast at the Delhi high court, two powerful bombs fastened to parked bicycles ripped through Hyderabad’s bustling Dilsukhnagar area on Thursday, killing at least 14 persons and injuring 119 others.

While no individual or group has claimed responsibility so far, intelligence officers insist that the deadly operation bears the stamp of Lashkar proxy, Indian Mujahideen.Thursday’s bombs triggered back-to-back explosions near popular movie theatres, blowing bodies into the air, flattening shops and houses and triggering panic among scores of injured people who were seen scurrying for cover in all directions with blood oozing out of their heads and legs.

The first bomb went off with a deafending blast near the Dilsukhnagar bus stop at 7.05pm, close to Venkatadri theatre and a minute later, another high intensity blast, near a snack shop close by, flung bodies into the air and left a crater on the tarmac, police and witnesses said. TV channels reported that an unexploded bomb was recovered from the area but there was no confirmation from the cops.Six months ago, there were low-intensity blasts in Pune which fortunately claimed no casualty. Since the last blast in which people died was in September 2011 in Delhi, a perception of ebbing terror threat had grown which Thursday’s Hyderabad bomb attacks have blown to smithereens. With finders being pointed at IM, it seems that terror operatives have regrouped now with deadly intent.

Immediately after the blasts at Dilsukhnagar on Thursday, terrified people ran from the blood-splattered area as glass shards and debris flew. They poured out into the narrow streets causing a stampede as people, including women carrying small children in the arms, ran for safety. Locals rushed to the aid of the injured, writhing and wailing with pain on the streets and sidewalks.”For a second, I got blinded as there was smoke and darkness all around. Later, I heard women and children wailing around me,” said Sudhakar Shetty, who survived the terror blasts with severe burns. “I was cooking in the kitchen of Mirchi Point (an eatery), and wanted to run out along with others but soon realized that I could not move as both my arms and legs were burnt,” he said.

At least 25 people were initially rushed to the Osmania general hospital and 15 to the Yashoda hospital in Malakpet, police said. More were taken to two other hospitals. Two days of strike by nurses and group IV staff caught doctors at the emergency ward off guard and some patients even offered to help. But with the CT scan machine not functioning at the hospital, most of the injured could not be scanned for internal hemorrhage. The 108 ambulance service alone shifted 42 injured to various hospitals, an official said.

“I have counted at least nine bodies and many more are injured and crying for help,” said a senior doctor at Osmania. Similar scenes were seen at Yashoda and Omni hospitals, where scores of injured were taken for treatment. Immediately after the blasts, phone lines got jammed and people left offices in a hurry, causing huge traffic jams all around. Many shops and business establishments downed their shutters.

Authorities were on high alert since Afzal Guru’s hanging on February 9. Apart from Jammu & Kashmir, there were protests against the hanging in Hyderabad. The execution also triggered revenge threats from Pakistan-based militants and Lashkar-e-Taiba (LeT) and Jaish-e-Mohammed (JeM) vowed renewed attacks on Indian cities. Members of the groups at a private gathering organised by the United Jihad Council in Pakistan, while paying tribute to Guru, had also vowed to step up their ‘jihad’ in Jammu & Kashmir.It was the third time that Dilsukhnagar has been targeted by terrorists. In 2002, a bomb went off in a scooter parked near Sai Baba temple in the area, killing two people, while another bomb was defused near a foot overbridge in 2007, extremely close to the spot where Thursday’s bombs were placed.

Prime Minister Manmohan Singh dispatched a National Security Guard team to the Hyderabad on a BSF aircraft to probe into the blast and immediately sanctioned Rs 2 lakh each to next of kin of those killed and Rs 50,000 each to those seriously injured. A National Investigation Agency, stationed in Hyderabad also joined the probe.Hyderabad is not new to terror attacks as three previous blasts killed scores of people. The first in May 18 2007, killed 14 people, including five in police firing at Mecca Masjid and in the second attack, which were twin blasts in Lumbini Park and Gokul Chat on August 25 2007, 42 people had died. – TOI