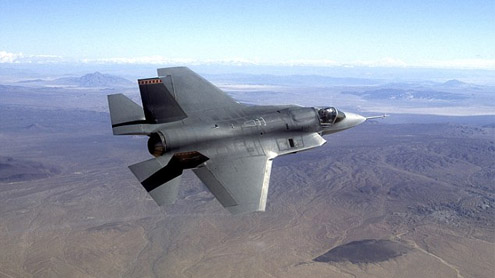 The Pentagon has suspended the flights of all 51 F-35 fighter planes after a routine inspection revealed a crack on a turbine blade in the jet engine of an F-35A, the Air Force’s version of the jet, in California.

Friday’s decision marked the second grounding of the warplane in two months and marked another setback for the $396 billion F-35 Joint Strike Fighter program, the Pentagon’s biggest and most expensive weapons program.The program has already been restructured three times in recent years and may face further cutbacks if Congress does not avert major budget reductions due to take effect on March 1.The Pentagon envisions buying more than 2,400 F-35s, but some members of Congress are balking at the price tag.

The F-35 program office said it was too early to know if the crack was a fleet-wide issue involving all three versions – the Air Force’s F35-A, Marine Corps’ F35-B and Navy’s F-35C – but said it was suspending all flights until an investigation was completed.A total of 51 F-35 jets were affected, including 17 that are being used for testing and 34 in use for training in Florida and Arizona.

It said it was working closely with Pratt & Whitney, the United Technologies Corp unit that builds the engine, and Lockheed Martin Corp, the prime contractor for the radar-evading warplane, to ensure the integrity of the engine and return the F-35 fleet to flight as soon as possible.The Pentagon’s F-35 program office began notifying the chiefs of the U.S. Air Force, Navy and Marine Corps late on Thursday about the engine issue and decision to ground the planes, said Kyra Hawn, a spokeswoman for the program office.

She said that a routine inspection at Edwards Air Force Base in California on February 19 revealed a crack on a low pressure turbine blade that is part of the F-35’s F135 engine.The blade was on an F-35 A-model, or Air Force variant, which takes off and lands from conventional runways.Pratt spokesman Matthew said the inspection showed ‘an indication of a crack’ on the third stage low pressure turbine airfoil. He said the company was working closely with the Pentagon, Lockheed and the military services to get the planes flying again.

Engineering teams are removing the turbine blade from the plane and plan to ship it to Pratt’s engine facility in Middletown, Connecticut, for more thorough evaluation and root cause analysis, according to the Pentagon and Pratt.Hawn said an initial analysis was expected next week.The U.K., Canada, Italy, the Netherlands, Turkey, Australia, Denmark and Norway are scheduled to purchase versions of the F-35.

The grounding comes on the heels of a nearly month-long grounding of the Marine Corps variant of the new warplane after a manufacturing defect caused a fuel line to detach just before a training flight in Florida.The Marine Corps variant of the F-35, which takes off from shorter runways and lands like a helicopter, was grounded for nearly a month after a fuel line detached just before a training flight at Eglin Air Force Base in January.That issue was later found to be caused by a manufacturing defect.The Pentagon and the U.S. Navy lifted flight restrictions on the B-model of the plane on February 13. – DailyMail