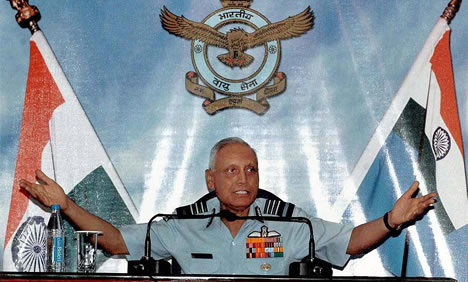 The preliminary inquiry registered by the CBI into the alleged payment of Rs 362 crore as kickbacks gives a fresh impetus to allegations about the deal being marred by bribes paid to Indians with the agency naming former Finmeccanica chairperson Giuseppe Orsi and its UK-based subsidiary AgustaWestland.

This is the second time that a military chief has been named in a case of relating to alleged manipulation of military contracts against favours received from middlemen — the first being in 1987 when CBI had raided former Navy chief Admiral S M Nanda in the HDW scandal. Former navy chief Admiral Sushil Kumar was named in CBI’s FIR in 2006 into Barak missile purchase, but he was not investigated for receiving kickbacks. Expressing confidence in the agency’s ability to investigate the case, CBI Director Ranjit Sinha told TOI, “We have got reliable documents in the case from Italy to go ahead with the probe.” Other senior CBI officials said there was prima facie evidence to show Tyagi took favours from AgustaWestland and the contract was compromised.

The CBI investigations, particularly an interim report on allegations that money was received by Tyagi cousins and routed to bribe recipients and specifications were altered and trials tweaked to boost AgustaWestland prospects may influence the defence ministry’s thinking on whether to cancel the contract. CBI has already spoken to Spagnolini and now a formal Letter Rogatory (LR) would be dispatched to Italy for more information. A CBI team, which returned from Italy on Sunday, has managed to get documents relating to the Italian firms that include mode of payments made by Indian Air Force (IAF) and investigations by Italian Police. Sources say they will look into bank accounts of named Indian suspects to trace the kickbacks.

According to Italian court documents, the total kickbacks was Rs 362 crore (51 million euro) in the 2010 purchase of 12 AW-101 helicopters for the use by President, Prime Minister and other VVIPs. “It is alleged that in the procurement process of the helicopters, some middlemen have influenced the deal in favour of UK-based company. It is also alleged that Italy based company paid commission in terms of several millions of euro to the middlemen. The two middlemen from their share of commission allegedly paid huge sums of money to several Indian nationals through Tunisia and Mauritius route in the garb of engineering contracts with two India-based companies,” said a CBI spokesperson.

All the suspects, including S P Tyagi, named by the CBI in its preliminary enquiry have earlier denied allegations of kickbacks in the deal. The accused are expected to be called in for questioning by CBI soon, and the agency would also formally seek all relevant documents from the ministry of defence and IAF. Sources said some other IAF officers, apart from Tyagi, who were directly or indirectly connected with the deal, would also be probed. The story of the complex web of kickbacks and middlemen began to unravel in investigations in Italy that began sometime last year. Secret recordings in cars of the accused and taps of their telephone lines as well as documents seized from their homes and Finmeccanica offices revealed phony contracts and front companies created to pay 51 million euro as kickbacks in the VVIP helicopter deal with India.

According to Italian court documents and other investigations, tax havens of Tunisia, Mauritius, and possibly Dubai and Singapore, besides the UK, Italy and India were used for routing the huge kickbacks. Some of the payments to Tyagi family were delivered in cash. The Italian agencies arrested Orsi, former Finmeccanica CEO, on February 15 on charges of paying bribes for the Indian deal.

In their report, Italian investigators’ has alleged that Tyagi brothers — Julie, Docsa (doc sa’ab in Hindi) and Sandeep — who are cousins of S P Tyagi received payoffs which were further distributed among officials. The report also alleged Orsi paid bribes through middlemen Haschke, Gerosa and Michel. Some of the payments were routed to India through IDS Infotech, IDS Tunisia and IDS Mauritius. While Haschke and Gerosa handled 21 million euro, Michel handled 30 million euro. The suspicion is that Haschke and Gerosa were handling air force, while Michel was dealing with politicians and bureaucrats.

Italian prosecutors have alleged that Hashcke and Gerosa, through the Tyagi brothers and their cousin S P Tyagi managed to change the tender details, modifying the operational ceiling from 18,000 to 15,000 feet of altitude, thus allowing AgustaWestland helicopter to qualify. It is also alleged that S P Tyagi introduced a comparative flight trial with a non-functional engine, thus giving a huge advantage to AgustaWestland’s helicopters, the only ones with three engines.

After the arrest of Orsi and Bruno in Italy, the Indian defence ministry ordered a probe. The ministry also placed the entire contract on hold, while serving a show cause on AgustaWestland for termination of the contract. In the absence of any credible evidence from the ministry to proceed with investigation, a team of CBI officials, accompanied by a joint secretary from the MoD, went to Italy to procure information from there.

Meanwhile, MoD sources said that they were awaiting a formal interim report from the CBI, as well as the report by its joint secretary who was part of the probe team that visited Italy, before deciding the next course of action. The ministry will seek further clarifications from AgustaWestland after the company replied to the show-cause notice for cancellation of contract from the MoD. – timesofindia