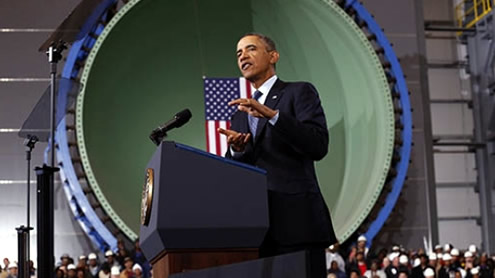 In the latest event staged by the White House to warn of the possible damage to public services, Obama spoke at the Newport News Shipbuilding shipyard where scheduled maintenance to the aircraft carrier USS Abraham Lincoln has been delayed by the budget crisis. “The threat of these cuts has already forced the Navy to cancel the deployment, or delay the repair of certain aircraft carriers. One that’s currently being built might not get finished,” he warned.

The $85 billion across-the-board budget cuts are due to begin on Friday, and might eventually force the government to scale back on a host of services such as air traffic control, law enforcement and food safety inspections. “These cuts are wrong. They are not smart. They’re not fair. They are a self-inflicted wound that doesn’t have to happen,” he told workers in Newport News, Virginia. In a move criticized by Republicans as a dangerous political stunt, the U.S. Immigration and Customs Enforcement agency released several hundred detained illegal immigrants in order to save money in preparation for the cuts. An agreement in Congress would halt the cuts, but with days to go before the ax starts to fall, the two parties do not agree on what to replace them with. There have been hardly any budget talks between the parties since New Year.

Republicans seek different, more targeted, spending cuts than entailed in “sequestration,” as the automatic cuts are known in Washington budget parlance. They complain that Obama is overplaying worries about sequestration to promote long-held plans to close tax loopholes. House of Representatives Speaker John Boehner accused Obama of using “our military men and women as a prop in yet another campaign rally to support his tax hikes.” Boehner, under pressure by conservatives not to cave to Obama’s demand for higher taxes, said members of the Democratic-controlled Senate need to “get off their ass” and pass legislation that would blunt the impact of the cuts.

In the Senate, Republicans struggled to come up with a unified plan for replacing the cuts, with Senate Republican leader Mitch McConnell saying lawmakers should simply pass a law giving the president flexibility on how the reductions would be carried out. Obama rejected that idea. In a sign of how far they are from halting sequestration, congressional Republicans and the White House have been trying to blame each other for the cuts, which both Democrats and Republicans agreed to in a 2011 plan to fix an earlier budget crisis.

“The president’s been running around acting like the world’s going to end because Congress might actually follow through on an idea he proposed and signed into law – all the while pretending he’s somehow powerless to stop it,” said McConnell. Americans blame both Obama and congressional Republicans for the sequestration crisis, according to a Reuters/Ipsos online poll released on Tuesday. Twenty-five percent of people said Republicans in Congress were responsible for sequestration, 23 percent blamed Obama and 5 percent pointed to congressional Democrats. Thirty percent said all of them were to blame. With a trip to a defense-heavy region of the country, Obama is seeking to draw attention to how the cuts would play out in communities where the military is a major source of jobs.

Defense spending makes up 9.8 percent of Virginia’s gross domestic product. But sequestration will be brought in gradually, and no shock to the economy is expected on Friday when it starts.

“The impact of this policy won’t be felt overnight but it will be real,” Obama said. “The longer these cuts are in place the greater the damage.” The planned cuts will be phased in over seven months, giving lawmakers time to halt the worst effects, possibly in budget talks later in March. But the Obama administration is highlighting a series of cuts to public services which are threatened. The release of several hundred illegal immigrants due to budget pressures was criticized by the Republican head of the House Judiciary Committee as a political stunt to pressure Congress to put off sequestration. “It’s abhorrent that President Obama is releasing criminals into our communities to promote his political agenda on sequestration,” U.S. Representative Bob Goodlatte said in a statement.

Immigration and Customs Enforcement released the immigrants while their deportation cases proceed. ICE spokeswoman Gillian Christensen said serious offenders were still being held. Sequestration might be stopped as part of negotiations next month over another unrelated fiscal issue: a continuing resolution to fund government operations. But House Republicans think they are in a strong bargaining position as there is not likely to be public outcry when the cuts start, unlike the “fiscal cliff” crisis at the New Year when the threat of tax hikes for most working Americans kept pressure on lawmakers to reach a deal.

The sequestration cuts apply in equal measure to non-defense spending and defense spending. The reductions will force the Pentagon to put most of its 800,000 civilian employees on unpaid leave for 22 days, slash ship and aircraft maintenance and curtail training, Defense Department officials have told Congress. Pentagon contracting and acquisitions personnel were authorized last week to consult with their industry counterparts about the upcoming spending cuts. Federal Reserve Chairman Ben Bernanke, in testimony on Tuesday to the Senate Banking Committee, urged lawmakers to avoid the spending cuts, warning that combined with earlier tax increases it could create a “significant headwind” for the economic recovery. (Additional reporting By Patricia Zengerle and Roberta Rampton in Washington; Writing by Alistair Bell; Editing by Tim Dobbyn and Doina Chiacu) – Yahoonews

Afghan insurgent Attacks Misreported, did not fall in 2012: NATO

Afghan insurgent Attacks Misreported, did not fall in 2012: NATO