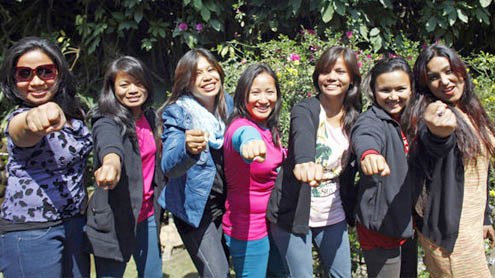 KATMANDU: It’s the world’s highest glass ceiling. Of the 3,755 climbers who have scaled Mount Everest, more than half are Nepalese but only 21 of those locals are women.

Aiming to change the all-male image of mountaineering in their country, a group of Nepalese women have embarked on a mission to shatter that barrier by climbing the tallest mountain on each of the seven continents.The women, aged between 21 and 32, have already climbed Everest in Asia, Kosciuszko in Australia and Elbrus in Europe. They are preparing to climb Mount Kilimanjaro in Africa to mark International Women’s Day this week.

“The main goal of our mission is to encourage women in education, empowerment and environment,” Shailee Basnet, the 29-year-old team leader, said before leaving for Africa.Women in this Himalayan nation rarely got the chance to climb because they were confined to their homes while their husbands led expeditions or carried equipment for Western climbers, Basnet said.It was only in 1993 that a Nepalese woman — Pasang Lhamu — first reached the 8,850-meter (29,035-foot) summit of Everest. She died on the descent.

According to Ang Tshering of the Nepal Mountaineering Association, Nepalese women had traditionally expressed little attraction to mountaineering.”It is only recently that women have shown interest,” Tshering said.Since they climbed Everest in 2008, the women have spoken in more than 100 schools across Nepal to tell students about their mission.”We are hoping to attract more women to mountaineering, both as a profession and as a hobby,” said Pema Dikki, 25, another member of the team.Basnet said the response to the Everest climb encouraged them to push ahead.

“After Everest, we felt that we needed to go beyond the borders, so we decided to travel to all seven continents to climb the highest mountains there,” Basnet said.Basnet said the team members have spent their savings, taken out loans and sought sponsorships to finance their expensive gear, climbing permits and plane tickets.The team plans to speak to students while in Africa to spread their theme, “You can climb your own Everest,” to encourage girls to stay in school.The team will be joined by two women from Tanzania and one from South Africa during the Kilimanjaro climb.Nepal has eight of the 14 mountains that are more than 8,000 meters (26,240 feet) in height. – YahooNews

PML-N’s popularity up by 9pc

China lays out economic blueprint for 2013

China lays out economic blueprint for 2013