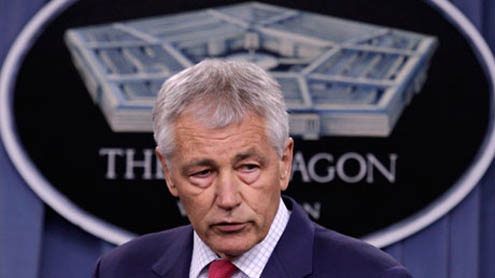 Fourteen interceptors capable of destroying ballistic missiles in flight will be added to an existing West Coast defense system.North Korea conducted its third nuclear test last month. Pyongyang has threatened a preemptive nuclear attack on the United States and South Korea, and ratcheted up threats linked to joint U.S.-South Korean military exercises.The North also has threatened to void the 1953 armistice that ended the Korean War.

Hagel said the U.S. is acting to stay ahead of challenges posed by North Korean, and Iranian, development of longer range ballistic missile capabilities.”The United States has missile defense systems in place to protect us from limited ICBM attacks, but North Korea in particular, has recently made advances in its capabilities and has engaged in a series of irresponsible and reckless provocations,” he said.The 14 additional interceptors will increase to 44 the number in the United States. Hagel said this will provide a 50-percent increase in defense capability.

Also announced is a plan to build an additional radar facility in Japan, and environmental studies for an additional interceptor site in the United States.Part of the European Phased Adaptive missile defense system will be shifted to bolster U.S. ground-based defenses. Hagel said this does not lessen the U.S. commitment to NATO missile defense or affect plans for 23 interceptors in Poland.Undersecretary for Defense Policy James Miller said the U.S. informed South Korea and Japan about the plans. He said China was informed as well, but he declined to characterize Beijing’s response.

Admiral James Winnefeld, Vice Chairman of the Joint Chiefs of Staff, referred to a speech this past week by President Barack Obama’s National Security Adviser, Tom Donilon, who said the U.S. was fully capable of responding to North Korean actions.”We not only intend to put the mechanics in place to deny any potential North Korean objectives to launch a missile at the United States, but also to impose costs upon them if they do, and we believe that this young lad [North Korean leader Kim Jong Un] ought to be deterred by that and if he is not, we will be ready,” said Donilon.

Winnefeld spoke about concerns the U.S. has about a speeding up of North Korean ballistic missile development, elevated after a North Korean Taepodong-2 launched a satellite into Earth orbit last year.Undersecretary Miller said at least one reported North Korea missile type, the KN-08, probably does have the range to reach the United States, although he declined to go into details of intelligence assessments on the missile’s development status.Plans call for the new interceptors to be fielded by 2017 at a cost that officials put at about $1 billion. Officials said some additional testing will take place in coming months. – VOA