Britain’s Iron Lady to be buried with full pomp 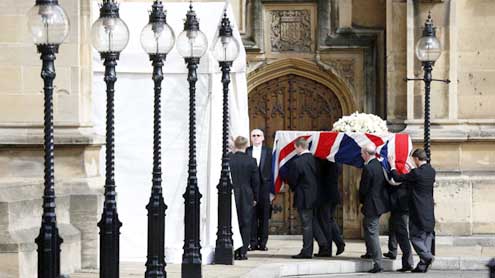 Britain's Iron Lady to be buried with full pomp

LONDON: The Iron Lady is being laid to rest — yet even in death, she remains a divisive figure.

World leaders and dignitaries from 170 countries were to attend the funeral of former British Prime Minister Margaret Thatcher on Wednesday, an elaborate affair with full military honors that will culminate with a service at St. Paul’s Cathedral in London.A coffin bearing the former leader’s body will travel by hearse to the church of St. Clement Danes, before being borne on a horse-drawn gun carriage to the cathedral, where 2,300 invited guests will await.

More than 700 soldiers, sailors and air force personnel will line the route and around 4,000 police officers will be on duty as part of a major security operation, stepped up after Monday’s bombings at the Boston Marathon that killed three people and wounded over 170.The woman nicknamed “the Iron Lady” transformed Britain during her 11-year tenure from 1979 to 1990, and died on April 8 at age 87.

Thatcher is being given a ceremonial funeral — not officially a state funeral, which requires a vote in Parliament. Still, the proceedings will feature the same level of pomp and honor afforded Princess Diana in 1997 and the Queen Mother Elizabeth in 2002.That has raised the ire of some Britons, those who view her legacy as a socially and economically divided nation. Scotland Yard says it is working with a “small number of people planning to protest” peacefully Wednesday.

Those attending the Thatcher funeral include Queen Elizabeth II and her husband Prince Philip, 11 prime ministers from around the world, former U.S. Secretary of State Henry Kissinger and former U.S. Vice President Dick Cheney.Some high profile guests sent their regrets: Former First Lady Nancy Reagan — whose husband Ronald had a close relationship with Thatcher — will not be able to attend; nor will former Soviet leader Mikhail Gorbachev, who shared key moments in history with the late prime minister. Germany’s Angela Merkel was sending her foreign minister, while the American political power families the Clintons and the Bushes declined to attend.

Alicia Castro, Argentina’s ambassador to the U.K., is not going, since Thatcher was in power in 1982 when Britain defended the Falkland Islands from being taken over by Argentina.Parliament’s Big Ben bell will be silenced for the funeral service, which will include hymns and passages from the Bible read by Prime Minister David Cameron and the late premier’s granddaughter, Amanda Thatcher.

On Tuesday, Thatcher’s body was taken to the Houses of Parliament in London. Her coffin, draped in a red, white and blue Union flag, was driven to the Palace of Westminster and carried into the crypt chapel of St. Mary Undercroft, where about 100 family members, colleagues and senior politicians attended a private service.The medieval chapel remained open overnight so lawmakers and parliamentary staff could pay their respects to the former leader. – YahooNews