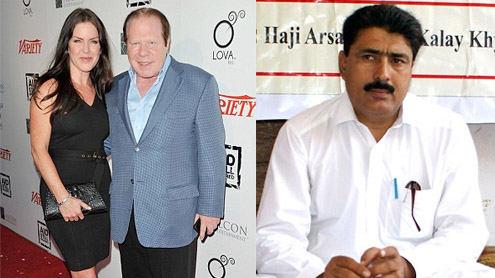 A Hollywood couple has launched a campaign targeting members of the military to help free the Pakistani surgeon who aided the CIA in their search for Osama bin Laden.

Robert H. Lorsch and his actress wife, Kira Reed Lorsch, have placed ads for their ‘Free Afridi’ campaign in the Military Times. Shakil Afridi is a doctor who was arrested shortly after the U.S. raid on bin Laden’s compound two years ago in Abbottabad and convicted in May 2012 of colluding with terrorists.U.S. officials say his charges are a sham and that he is actually being punished for cooperating with the CIA. He is now serving a 33-year-sentence in a Pakistani prison.

Lorsch’s ad asks military members and their families to participate in a poll that asks whether they would rather be ‘captured and tortured’ ‘or rescued and set free.’The ad directs readers to a website that accepts contributions to support Afridi and his family. The website says the aim of the poll is to send a message to the White House and the State Department to address the plight of the doctor.Afridi has been called a hero by U.S. lawmakers and intelligence officials for his assistance in tracking down bin Laden.

At the time that he was working for the CIA, Afridi didn’t know he was helping to find the al Qaeda leader. He was only told that he was helping to locate a high-level target.’Over the course of his several years of service, Dr. Afridi was able to provide valuable information on al Qaeda in the FATA [Federally Administered Tribal Area], the group’s safe haven,’ a senior U.S. official told the Daily Beast.

As part of his work for the CIA, Afridi set up an immunization campaign, serving hepatitis-B vaccinations to people in Abbottabad.The campaign was set up to try and get DNA samples from the people living in bin Laden’s compound.Ten days after Afridi’s attempt to administer the vaccine to the compound’s inhabitants – which failed because he wasn’t let inside – Navy SEALs raided it and killed bin Laden. Afridi is now on a hunger strike in prison over Pakistani officials’ denial of access to visits from his family and legal counsel. – DailyMail