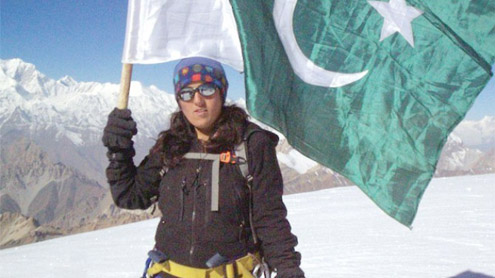 The President, in a message of felicitation, lauded the will and determination of Samina Baig and said that she had made the nation proud and earned laurels for the country by becoming the first Pakistani women  to scale Mount Everest, the world’s highest mountain with a peak at 8,848 meters. He said that the whole nation was proud of the young lady mountaineer for her historic achievement and also for introducing Pakistani women as a symbol of talent and great potential.

While paying glowing tribute to the two young Pakistani mountaineers fromGilgit Baltistan, Samina Baig (21) and Mirza Ali (29), the President termed theyouth a great future asset of the country and said that Pakistanis were at alented nation with all the potential to rise in every field of life and urged for the proper grooming and guiding of the talent of Pakistanis especially the youth and women of the county to maximize its true potential.The President expressed hope that both Samina Baig and her brother MirzaAli would continue to work hard and keep the flag of the country flying high inthe world of mountaineering. – APP