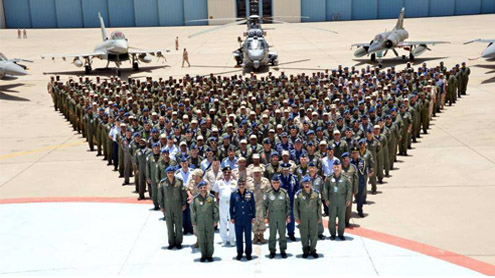 On his arrival he was presented with the Guard of Honour. The air chief was given a comprehensive briefing on the exercise. Chief of the Air Staff, Royal Saudi Air Force (RSAF) Lt General Mohammed Fayadh bin Hamid Al Ruwaili and Turkish.Air Force (TuAF) Commander, General Mehmet Erten also witnessed the exercise.According to a press release issued by PAF, the Tri Nation International Air Exercise Peace Falcons-2013 among RSAF, TuAF and PAF was held at King Fahd Air Base, Taif, Saudi Arabia from May 6 to 22.

PAF Contingent comprising F16s, Mirages Rose-II and 180 personnel participated in the Exercise with members of other two brother countries.Pakistan, Saudi Arabia and Turkey have a long history of military cooperation.The Air Forces of these brotherly countries have been successfully conducting joint exercises for many decades to enhance mutual understanding among them.

In this exercise, the contingents of three Air Forces undertook joint planning and execution of various combat missions.The exercise will hone their professional skills and enhance existing brotherly relations between the three countries and their Air Forces.