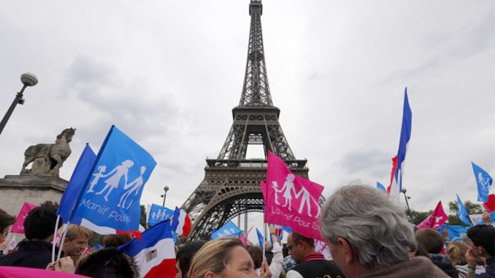 Although France officially legalized gay marriage last month, organizers of an anti-gay marriage — or “pro-family” — parade decided to go forward with a planned demonstration Sunday — and hundreds of thousands turned out.

Sandy Glass from Naperville, Illinois, was in Paris and witnessed the parade unexpectedly, telling TheBlaze she and her husband estimated more than 250,000 people were present.”It brought tears to our eyes,” Glass, a conservative and Glenn Beck fan, said in a phone interview.”We go to France a lot and thought it was another left wing protest,” she said later, recalling that last year they found themselves in the middle of a Socialist rally.

When they followed the noise and witnessed what she described as “pro-family” signs, Glass said she realized “oh, we’re not the only ‘crazy’ ones,” explaining that it is “sometimes very difficult to be on the right in America.”The Associated Press reported there being about 5,000 police present for the demonstration, due to clashes that have occurred in other anti-gay marriage protests.But Glass said the event was very well organized and even seemed to have its own security detail.

“Nobody bothered these people,” she said, noting that people on the street were giving thumbs up and people in balconies were cheering. “Here are some photos from the event:”It was such a show of force that was pro something, not against something,” she said. “I think it was awesome.”The plan of French protesters, according to Glass, is to vote out lawmakers with whom they hold opposition in 2014. – YahooNews

Obama: Gov’t with Oklahoma ‘every step’ of the way

Obama: Gov't with Oklahoma 'every step' of the way