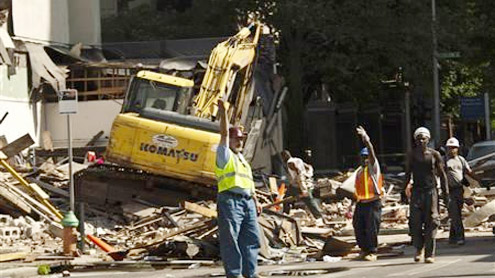 PHILADELPHIA: Six people were killed and 14 were injured on Wednesday when a four-story building under demolition collapsed in downtown Philadelphia, burying a neighboring thrift store in concrete and debris, officials said.

Search and rescue efforts continued into the night for more victims of the collapse, which occurred around 10:45 a.m. EDT, and Mayor Michael Nutter suggested at a late night news conference that the number of casualties could rise.”We still do not know how many people were inside the thrift store or possibly on the sidewalk” at the time of the collapse, Nutter said. “If someone else is in that building, they will find them.”

Shortly after the mayor concluded his press briefing a 61-year-old woman was pulled from the rubble alive, more than 12 hours after the collapse, and taken to a hospital in critical condition.”They were digging they felt her, and then she was able to respond and squeeze their hand,” Michael Resnick, Philadelphia’s public safety director, told Reuters.”She was talking to the firefighters who were pulling her out,” Resnick said. “It feels outstanding to pull out somebody who is alive.”

Dozens of police and firefighters were still sifting through the chunks of concrete and splintered wooden boards past midnight, the scene lit by large spotlights as residents stood by watching. Several streets remained blocked off.Authorities declined to identify the dead other than to say that they included one man and five women who had all been inside the Salvation Army thrift store when the building next door came down.Most of the injured were also thought to have been inside the store or on the sidewalk in front of it at the time. Aside from the woman rescued last, most were said to be in stable condition.

Authorities say the cause of the sudden collapse, which occurred at 22nd and Market streets in the heart of Philadelphia’s busy Center City district, was still under investigation.One witness, 31-year-old Dan Gillis of Cinnaminson, New Jersey, a construction worker on a job across the street, said he saw a crane remove a supporting beam from the front of the building and then the wall next to the thrift store started swaying.Jeffrey Fehnel, 48, of Philadelphia, said a backhoe hit the rear side of the building at about the same time.

“The building came down. It was like a big blast,” Fehnel told Reuters.A witness told Reuters the building collapse shook the ground and knocked a man off his feet on the sidewalk outside the thrift store.”It was ground-shaking. The shaking of the ground made the man fall down,” said Jordan McLaughlin, 18, of Philadelphia.Authorities said the building that was being demolished had housed an X-rated book and video store.They said it was owned by Richard Basciano, a well-known owner of adult entertainment properties including Philadelphia’s last X-rated movie house, which closed in 2012, and a New York Times Square pornography emporium known as Show World, which closed in 2004.Basciano could not be reached for comment. – YahooMail