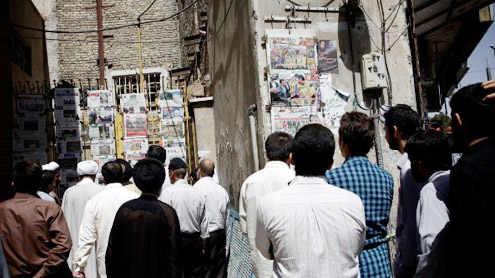 Two of the eight candidates running in Iran’s upcoming presidential election have dropped out of the race ahead of Friday’s election – offering up cryptic reasons for doing so.

Mohammad Reza Aref announced his decision to withdraw Monday on his campaign website.Hours earlier, another candidate, Gholam-Ali Haddad-Adel, also said he wouldn’t be contesting.Haddad-Adel didn’t offer a reason.Aref cited former Iranian President Mohammad Khatami, a moderate with whom he has a close relationship.”On Monday evening, I received a letter from Mr. Mohammad Khatami and decided my presence to the election is not beneficial to overall reform,” he said on his official website.

Aref, 62, is a reformist and was Iran’s vice president from 2001 to 2005, during Khatami’s presidency.A non-cleric, he is also a member of the Expediency Council — which mediates between Iran’s parliament and the non-elected Guardian Council.Haddad-Adel, 68, is a conservative and former speaker of the parliament. His daughter is married to Ayatollah Khamenei’s son.The election is scheduled to take place Friday.

What you need to know about IranBut unlike the polarized presidential campaigns of 2009, the run up to this year’s election has been tame.”Iranian public opinion is deafeningly silent, a silence that even the media close to the regime has complained about,” Ali Reza Eshraghi, Iran’s Project Manager at the Institute for War and Peace Reporting (IWPR), said in a commentary for CNN.com.”Unlike the four previous presidential elections during which the streets were turned into lively and colorful carnivals with the supporters of different candidates engaging in unending debates and fervent speeches, this time it is only the walls of the streets that have been covered with banners and posters.”

Four years ago, President Mahmoud Ahmadinejad won re-election with 62.63% of the vote, according to Iranian government sources. His nearest rival, Mir Hossein Moussavi received 33.75%.Demonstrations, protesting the outcome of the election, broke out across Tehran. Dozens of people were reported killed.But despite widespread unrest, Ahmadinejad’s re-election was formally certified by the Council of Guardians.In July 2009, leading clerics openly defied the Ayatollah and called for nullification of the election, but to no avail. Ahmadinejad will complete his term this month.Because he has already served two terms, he cannot run again. – CNN