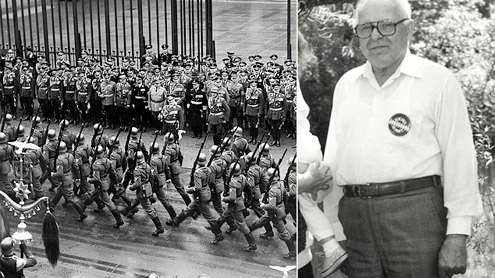 The revelation last week that Michael Karkoc, a 94-year-old man living in Minnesota, was a Nazi war criminal, has sparked the question: how many more of these persecutors are still alive?

Rabbi Marvin Hier estimated that ‘it could be hundreds’ in an interview with the New York Magazine blog, Daily Intelligencer.’Normally I would have said thousands, but they’re in their eighties and nineties, and many of them have died. So it’s very hard to give you an exact figure of how many cases there are like the one in Minnesota in other parts of the United States. But it is fair to say that there could be many.’ Rabbi Hier is the founder of the Simon Wiesenthal Center, which is named after the most famous Nazi hunter.

Efraim Zuroff, one of the last Nazi hunters is also the director of the center in Israel, and says modern medicine may be prolonging the lives of these men now in their eighties and nineties.’You have to take into account that at least many tens of thousands or even hundreds of thousands of men (and some women) were participants in these crimes at a relatively young age. And thanks to the progress of modern medicine, many live today to age 90 and above,’ Zuroff said.He adds that ‘people without a conscience live longer. Less stress.’

Immigration into the United States was still relatively easy after World War II, with boat loads of new Americans arriving at ports every day.Unfortunately, Hier says, ‘immigration officials were not sufficiently briefed and knowledgeable about the [Nazi] auxiliary units. They thought of the SS in terms of Germans or Austrians, but they didn’t know that wherever Hitler went, there were groups of citizens of those countries that assisted the SS in their tasks. That knowledge came much later on.’

When they made it to the U.S. it was easy to explain why they sought a new life, Hier says. ‘They had a common story, which was they were escaping communism.’ According to a 2008 report by the Justice Department’s Office of Special Investigations, the OSI’s estimate in 1984 was that ‘approximately 10,000 Nazi persecutors had emigrated to the United States.’ But the report countered that statement adding that ‘In retrospect, that estimate seems high.’

If Hier’s estimates are true, that only makes Zuroff’s job harder.Since these Nazi criminals are so old, it’s becoming harder to prosecute them and he doesn’t ahve much time left. Take for example, John Demjanjuk, who lived as a U.S. citizen in Ohio for several years before being deported to Germany, at the age of 89 and suffering from a terminal bone marrow disease and chronic kidney disease, to stand trial for accessory to murder in the 27,900 deaths at the Sobibor extermination camp. Demjanjuk had to be wheeled into court every day on a stretcher, and doctors limited his participation to two 90 minute sessions a day, which his lawyer used as evidence that he was not fit to stand trial.

Eventually he was deemed fit and in 2011 was convicted. He appealed, but died before he could argue his case again.Some argue that it’s not worth it when the criminal is so old, and doesn’t have long to live anyway.Zuroff strongly disagrees with this perspective.’They are the last people on earth who deserve sympathy. You should not look at them and see a frail person. You should see someone, who, at the height of their strength and physical prowess, devoted that strength to murdering men, women and children,’ Zuroff said on The Huffington Post. – DailyMail