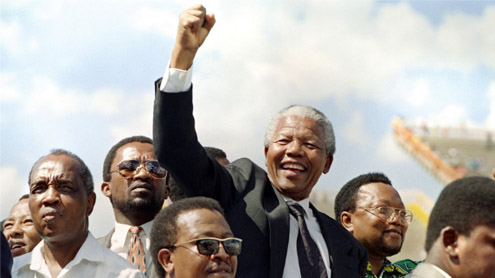 Throughout the night, crowds of people stood outside the hospital where former South African President Nelson Mandela is being treated, and among the balloons, posters and cards early Tuesday were dozens of news crews and broadcast vans.

Government officials paid visits as well.Mandela’s wife, Graca Machel, spends every night at the hospital, where the former president has been since June 8 for a recurring lung infection. Previously, authorities had described his condition as serious but stable.But over the weekend, his health took a turn for the worse, with the South African president’s office saying he was in critical condition.”The doctors are doing everything possible to ensure his well-being and comfort,” President Jacob Zuma told the nation Monday.

The former president’s health will not affect U.S. President Barack Obama’s planned visit to the country this week, Zuma said, according to the press association.Mandela, 94, has become increasingly frail over the years and has not appeared in public since South Africa hosted the World Cup in 2010.Outside the hospital Monday, a security wall was awash with get-well cards, balloons, flowers, cards and paintings, the press association reported.

Ready for the spiritual realm

For Mandela’s family, these are very personal times — times to be cherished as the end nears.”I believe he is at peace,” said Makaziwe Mandela, who was born in 1953 to Mandela’s first wife, Evelyn.”All we do every day is take one day at a time and pray to the good Lord,” Makaziwe told CNN’s Robyn Curnow.”All I pray for as a daughter is that the transition is smooth. … He is at peace with himself. He has given so much to the world.”

In and out of hospital

The anti-apartheid hero has been in and out of the hospital in recent years.His history of lung problems dates to when he was a political prisoner on Robben Island during the apartheid era, and he has battled respiratory infections since.Considered the founding father of South Africa’s democracy, Mandela became an international figure while enduring 27 years in prison for fighting against apartheid, the country’s system of racial segregation.

In 1993, Mandela and then-South African President F.W. de Klerk jointly won the Nobel Peace Prize.The iconic leader was elected the nation’s first black president a year later, serving only one term, as he had promised.Even as he has faded from the spotlight, he remains popular and is considered a hero of democracy in the nation. Last year, South Africa launched a new batch of banknotes with a picture of a smiling Mandela on the front.

His impact extends far beyond South Africa. After he left office, he mediated conflicts in Africa and the Middle East.Word of his worsening health drew global expressions of concern.”We have seen the latest reports from the South African government that former President Mandela is in critical condition,” Caitlin Hayden, a U.S. National Security Council spokeswoman, said in a statement Sunday. “Our thoughts and prayers are with him, his family and the people of South Africa.” – CNN

Kerry: Lives May be Lost Due to Snowden’s Betrayal