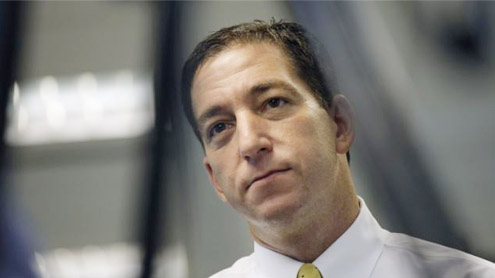 The reporter who helped Edward Snowdon expose the National Security Agency’s top-secret surveillance programs has had secrets from his own checkered past uncovered.

That relationship soured quickly and after only two months of working together, Haas refused to pay Greenwald and Buchtel their share of the profits.A nasty legal battle ensued in which Haas also accused Greenwald and Master Notions of taking his client list to market their own videos via ‘hairystuds.com.’

The case was settled in 2004 after Greenwald was able to contend that Haas didn’t have a real client list to steal, and that Master Notions had assembled its own by ‘reviewing clubs, groups and chat rooms on the Internet and on America Online, which are geared toward those with an interest in adult videos.’Writing about the incident on the Guardian’s website on Wednesday, Greenwald wrote: ‘The producer quickly settled the case by paying some substantial portion of what was owed, and granting the LLC the rights to use whatever it had obtained when consulting with him to start its own competing business.’

He also writes that he was bought out of the company by my partners not long after.’I’m 46 years old and, like most people, have lived a complicated and varied adult life,’ Greenwald also wrote about his checkered past.’I didn’t manage my life from the age of 18 onward with the intention of being a family values U.S. senator. My personal life, like pretty much everyone’s, is complex and sometimes messy.’NBC ‘Meet the Press’ host David Gregory got a rise out of Glenn Greenwald on Sunday by asking the Guardian reporter why he shouldn’t be charged with a crime for having ‘aided and abetted’ Snowden.

Greenwald replied that it was ‘pretty extraordinary that anybody who would call themselves a journalist would publicly muse about whether or not other journalists should be charged with felonies.’Last Sunday Ecuador’s foreign minister and the anti-secrecy group WikiLeaks said Snowden was headed to Ecuador to seek asylum.He had fled to Hong Kong last month ahead of leaking details about an NSA surveillance program. He is now in the transit area of Sheremetyevo Airport in Moscow.During his interview with NBC’s Gregory, Greenwald declined to discuss where Snowden was headed.

That refusal seemed to prompt Gregory to ask: ‘To the extent that you have aided and abetted Snowden, even in his current movements, why shouldn’t you, Mr. Greenwald, be charged with a crime?’Greenwald said Gregory was embracing the Obama administration’s attempt to ‘criminalize investigative journalism,’ citing an FBI agent’s characterization of Fox News journalist James Rosen as a probable co-conspirator of a State Department contractor who was suspected of leaking classified information to Rosen. Rosen was not charged.

‘If you want to embrace that theory, it means that every investigative journalist in the United States who works with their sources, who receives classified information is a criminal, and it’s precisely those theories and precisely that climate that has become so menacing in the United States,’ said Greenwald.Gregory responded that ‘the question of who is a journalist may be up to a debate with regard to what you are doing.’ Gregory also said he was merely asking a question.

‘That question has been raised by lawmakers as well,’ Gregory said. ‘I’m not embracing anything, but, obviously, I take your point.’Later, Greenwald tweeted, ‘Who needs the government to try to criminalize journalism when you have David Gregory to do it?’ and, ‘Has David Gregory ever publicly wondered if powerful DC officials should be prosecuted for things like illegal spying & lying to Congress?’In his column on Wednesday, Greenwald also write that ‘distractions about my past and personal life’ would not stop him from pursuing his reporting on the NSA scandal.’None of that – or anything else – will detain me even for an instant in continuing to report on what the NSA is doing in the dark,’ he wrote. – DailyMail

Britain could face a return to Seventies-style power rationing