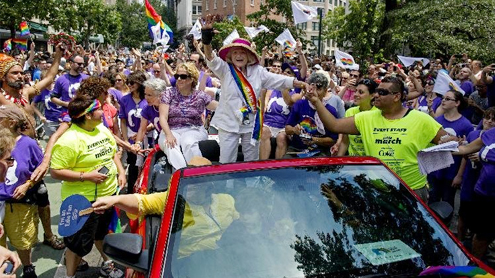 Gay pride celebrations were held in San Francisco, New York, Chicago, Seattle, Minneapolis and several other cities by marchers energized by the top court’s rulings extending federal benefits to married homosexual couples and striking down a ban on same-sex marriages in California.In San Francisco, two couples who sued to overturn the California ban led nearly 1 million people in one of the biggest parades in years. Some people carried signs that read “Thank you, Supreme Court!”

The two couples, Kris Perry and Sandy Stier and Paul Katami and Jeff Zarrillo, got married on Friday, hours after the ban was lifted.On Sunday, crowds cheered as they rode through the parade in a baby-blue convertible with rainbow-colored cans dragging from the back of the car. Some in the crowd were dressed in rainbow colors, others wore bridal dresses and tuxedos.In New York, Edith Windsor, whose lawsuit prompted the Supreme Court decision to grant gay couples federal benefits, was among the grand marshals leading New York’s Gay Pride march down Fifth Avenue.

Windsor, 84, recalled her late spouse, Thea Clara Spyer, who suffered from multiple sclerosis, before leading the parade to shouts of “Edie!””Thea, in her wheelchair, and I would watch the parade together every year,” she said.The annual gay pride parades mark the anniversary of the Stonewall Riots. A police raid in 1969 on the Stonewall Inn, a gay bar in New York, set off protests that popularized the slogan “Out of the closet and into the streets.” The protests are widely credited with ushering in the modern gay rights movement. Organizers of the gay parades in several cities said they planned for large turnouts after the Supreme Court issued its rulings on Wednesday.

The rulings came amid rapid progress for advocates of same-sex marriage in recent years in the United States and internationally. Opinion polls show a steady increase in U.S. support for gay marriage.On Sunday, supporters of gay marriage also cheered news that a U.S. Supreme Court justice rejected a long-shot bid to halt same-sex marriages in California.Justice Anthony Kennedy denied the request from supporters of the California gay marriage ban, known as Proposition 8, which state voters approved in 2008. Same-sex marriage opponents asked the high court on Saturday to overrule a 9th U.S. Circuit Court of Appeals order that lifted an injunction barring same-sex unions.

On the streets of New York, many people heralded the rulings.”It’s awesome,” said Howard Tran, a 36-year-old pediatric nurse who attended with his husband and their five-month-old twins.The San Francisco parade was led by a contingent known as Dykes on Bikes, a lesbian motorcycle club.Raucous cheers from the crowd also went up for California Lieutenant Governor Gavin Newsom and Attorney General Kamala Harris, both heterosexual politicians who have expressed strong support of same-sex marriage.Newsom waved to the crowd as he rode with his wife and two young children in a white BMW with a rainbow striped hood. – YahooNews