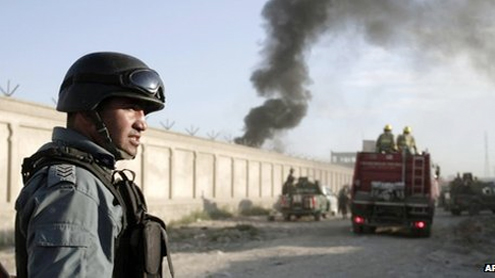 Insurgents have killed at least seven people in a suicide attack on the Kabul base of a logistics firm supplying Nato forces in Afghanistan, police say.

Five guards, four of them Nepali, were among those killed in the gun and bomb attack, which came early on Tuesday.The Kabul police chief told the BBC the four insurgents, who were all killed, had a truck full of explosives.This is the latest in a series of attacks on targets in the Afghan capital in recent months.Last week, Afghan security forces put down a militant gun and bomb attack near the presidential palace, in one of the most secure areas of Kabul.The Taliban say they carried out that attack, in which four insurgents and three security guards died.

On Monday, the Afghan intelligence agency said a would-be suicide bomber had been shot dead in central Kabul. In the latest incident, smoke was seen rising above the scene of the attack in the north of the city.Reports suggested the bomber’s vehicle was stopped outside the facility by guards.When the explosives were detonated, gunmen began shooting at guards in a 30-minute battle, officials said.As well as the Nepali guards, two Afghan truck drivers who were waiting to enter the compound were killed and an Afghan guard.

All four attackers were killed, Kabul police chief Gen Ayub Salangi said. The blast from the truck left a large crater in the ground, police said.Last month, Afghan forces assumed security responsibility for the whole of the country for the first time since the Taliban government was ousted in 2001.International troops will remain in Afghanistan until the end of 2014, providing military back-up when needed.The US and its Nato allies want the Afghan government to begin dialogue with the Taliban with a view to opening peace negotiations.But when the Taliban opened a representative office in Qatar – seen as a possible venue for talks – last month, it prompted an angry reaction from the Afghan government, which said the office had the appearance of a rival administration.Afghan President Hamid Karzai also says any dialogue process must be “Afghan-led”. – BBC