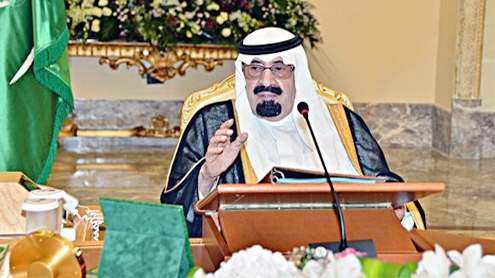 The Custodian of the Two Holy Mosques King Abdullah has sent a cable of congratulation to Chancellor Adli Mansour, President of Egypt.

On Wednesday evening, Egypt’s army chief Abdel Fattah Al-Sisi ousted President Muhammed Mursi and declared the head of the Supreme Constitutional Court caretaker leader. In his message to Mansour, King Abdullah appeal to God to help him “shoulder the responsibility’ given to him and to achieve the hopes of his people.

Egypt’s leading Muslim and Christian religious leaders backed an army-sponsored road map which suspended the constitution and called for early presidential and parliamentary elections.Ahmed Al-Tayeb, Grand Sheikh of Al-Azhar, and Pope Tawadros, the head of the Coptic Church, both made brief statements following the announcement by the head of the armed forces that deposed the elected president.

Tawadros said the plan offered a political vision and would ensure security for all Egyptians.Mursi denounced the army’s action as an “illegal” and urged Egyptians to “peacefully resist the coup as he himself will do,” a senior aide told AFP.Opposition leader Mohamed ElBaradei said the roadmap announced by Sisi “meets the the people’s demands for early presidential elections.”

The army’s dramatic move comes after millions of Egyptians took to the streets to call for his ouster, accusing him of betraying the 2011 revolution that brought him to power.ElBaradei said the Arab Spring revolution of 2011 had been relaunched by the announcement of the army-sponsored road map.