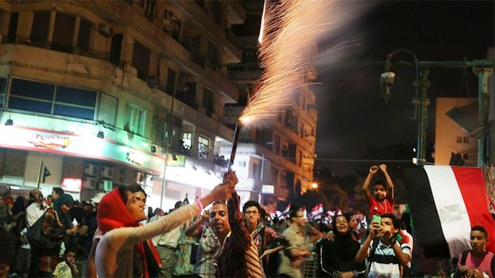 Egypt’s army has said it will guarantee the right to peaceful protest ahead of the traditional day for major rallies.

Muslim Brotherhood supporters are expected to rally on Friday after the army deposed President Mohammed Morsi.New interim leader Adly Mahmud Mansour, the top judge of Egypt’s constitutional court, has pledged to hold elections based on “the genuine people’s will”.Muslim Brotherhood spokesman Gehad al-Haddad said it refused to co-operate with the new regime.

Mr Morsi is in detention, as well as senior figures in the Brotherhood – the Islamist group of which the former president is a member. Hundreds more are being sought.Early on Friday, one soldier was reported killed after Islamist militants attacked military and police checkpoints in the Sinai Peninsula with rockets and mortar fire.Security checkpoints at al-Arish airport, near the border with Israel and the Gaza Strip, and a police station in Rafah were targeted, officials said.

Sinai has seen a series of militant attacks on security installations and oil pipelines over the past two years and it is unclear whether the latest attacks are linked to President Morsi’s removal.The upheaval in Egypt followed days of mass rallies against Mr Morsi and the Brotherhood, who protesters accused of pursuing an Islamist agenda against the wishes of the majority of people and of failing to tackle Egypt’s economic problems.The army said that Mr Morsi, who was Egypt’s first freely elected leader, had “failed to meet the demands of the people”.

In a statement on Facebook on Thursday, the army command said it would not take “arbitrary measures against any faction or political current” and would guarantee the right to protest, as long as demonstrations did not threaten national security.”Peaceful protest and freedom of expression are rights guaranteed to everyone, which Egyptians have earned as one of the most important gains of their glorious revolution,” it said.Mohamed ElBaradei – a leading opposition figure who backed the overthrow of Mr Morsi – said the army’s intervention had been “a painful measure” but had been on behalf of the people and ultimately averted civil war.

“Mr Morsi unfortunately undermined his own legitimacy by declaring himself as a pharaoh,” he told the BBC.But he said the army had no intention of ruling the country and that elections would have to be held within a year.He also said he hoped Muslim Brotherhood members would be released from prison soon, and that he had urged the military to treat Mr Morsi with “full dignity as a former president”.At his news conference, Mr Haddad declared the Brotherhood’s “full refusal and revoking of the military coup” and demanded Mr Morsi’s immediate release, along with the other detainees.

He declared the Brotherhood’s “full denial of co-operation” with the new regime and said it would take part in all “peaceful, people-led protest”.A coalition of Islamist parties – the National Coalition in Support of Legitimacy – has called for mass demonstrations to denounce the army’s actions following Friday prayers.Some 50 people have died since the latest unrest began on Sunday.

There are continuing fears of confrontation between the pro- and anti-Morsi blocs, with reports that Morsi supporters in a town north of Cairo have been set upon and badly beaten.Among the leading figures who have been detained are Mr Haddad’s father, senior Morsi aide Essam al-Haddad, and Saad al-Katatni, head of the Muslim Brotherhood’s Freedom and Justice Party, which won Egypt’s parliamentary elections in January 2012.

On Thursday afternoon unnamed officials said Mohammed Badie, the Brotherhood’s General Guide, had been arrested in Marsa Matruh, a Mediterranean coastal city to the west of Cairo.Arrest warrants have reportedly been issued for some 300 other members of the Muslim Brotherhood, including Mr Badie’s deputy, Khairat al-Shatir.Some of those held, including Mr Morsi, are being charged with “insulting the judiciary”, and the public prosecutor’s office told AFP news agency travel bans had been placed on 35 senior leaders. – BBC

Bolivia 'could close' US embassy after plane incident