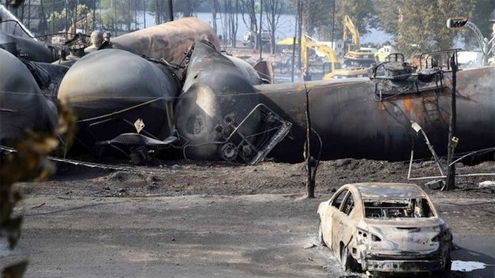 At least five people died when runaway train cars packed with crude oil derailed and blew up early on Saturday.Some 30 buildings had been completely incinerated by fires which engulfed the historic centre, said Mr Harper.Police are trying to find 40 missing people: a nearby bar was said to have been crowded at the time of the blast.”This is an enormous area, 30 buildings just completely destroyed, for all intents and purposes incinerated,” Harper said. “There isn’t a family that is not affected by this.”

The fires were so intense and burnt for so long that Quebec police warn some bodies may never be recovered.The five bodies found are so charred they have been sent to Montreal for identification, police say.Fires were finally extinguished early on Sunday evening.”The flames, the fires all have been put out now. We did it,” said fire chief Denis Lauzon.

Visiting the affected area on Sunday, Mr Harper said an “unbelievable disaster” had befallen Lac-Megantic, which is around 250km (155 miles) east of Montreal.Saturday’s pre-dawn explosion sent a fireball and black smoke into the air, forcing the evacuation of 2,000 people.”This is an enormous area, 30 buildings just completely destroyed, for all intents and purposes incinerated,” said Mr Harper. “There isn’t a family that is not affected by this.”

He added: “There’ll be investigations to ascertain what’s occurred and make sure it can’t happen again.”Firefighters had been battling the flames with water and a fire retardant, but were staying at least 1,000 ft from the burning tankers for fear of more blasts, Mr Lauzon told reporters earlier on Sunday.”We lost the bibliotheque [library] which had all the memories of people here – it’s a mess,” said Chief Lauzon.People whose homes have been badly damaged were being given shelter at a nearby school.

The Montreal, Maine & Atlantic train had been parked in the village of Nantes – about 7km (four miles) from Lac-Megantic – during an overnight driver shift-change, said a company spokesman.ts 73 cars carrying pressurised containers of crude oil somehow became uncoupled from five locomotive engines, gathering speed as they rolled downhill before derailing in the heart of Lac-Megantic.Bernard Demers, who runs a restaurant near the blast site, said the fireball that followed the derailment at around 01:00 (05:00 GMT) on Saturday was “like an atomic bomb”, the Sunday Telegraph reported.The train had been travelling from the Bakken Field in North Dakota to a refinery in Saint John, New Brunswick.Montreal, Maine & Atlantic owns more than 800km (500 miles) of track serving Maine, Vermont, Quebec and New Brunswick.A picturesque lakeside town that is home to some 6,000 people, Lac-Megantic is close to the US border with Maine. – BBC