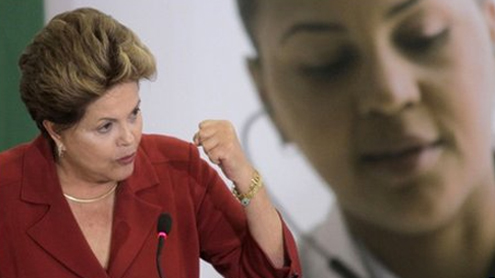 Brazil has unveiled plans to hire 10,000 doctors to work in poorly served areas as part of wider reforms.

The shake-up will include employing foreign doctors for the first time from September, as well as changes to the university medicine curriculum.Students graduating from 2015 must serve two years in the public sector.The changes come about a month after millions took to the streets in mass demonstrations against poor public services, corruption and other issues.The health ministry said the “More Doctors” scheme was modelled on health services in countries such as Britain and Sweden.Foreign doctors will only be considered if the posts are not filled by Brazilian nationals, officials say.

The job vacancies will reportedly be advertised at the end of the month.”The More Doctors programmed does not have a primary goal of bringing doctors from abroad, but chiefly of taking more health services to the inner country,” President Dilma Rousseff said.Ms Rousseff said the plans were not only tackling a long term problem but the “here and now” of Brazilians who do not have access to doctors.The doctors hired under the new scheme will be paid a “stipend” of 10,000 reais (less than $ 4,500 a month).

President Rousseff also announced investments of more than $3m in upgrading existing and building new surgeries.An extra 11,500 places on medical courses should also be offered in the next four years, according to government’s plans.Brazilian medical students are currently required to study six years before being allowed to practise.Under the plans announced on Monday, they will have to work for two years in the public sector before graduating, upping the graduation time to eight years.

Previous projects to attract Cuban doctors to Brazil have met fierce resistance by doctors’ associations.The scheme announced on Monday was also met with scepticism by the Federal Medicine Council, which is considering a court challenge to the president’s decree.A series of protests sparked by bus fare rises in June quickly escalated into nationwide demonstrations against a range of issues, from corruption to the price of staging the 2014 World Cup.Poor public services, including shortcomings in the Brazilian health system, were a frequent grievance brought up by protesters. – BBC