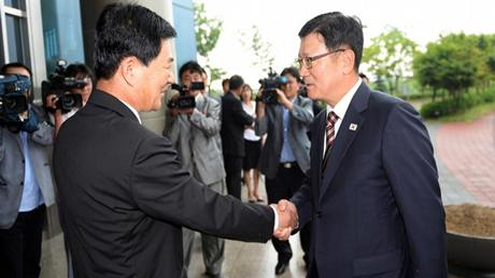 North and South Korea have started in-depth talks on reopening a jointly-run industrial zone in Kaesong.

The two sides agreed in principle to restart operations at the Kaesong Industrial Complex after marathon negotiations over the weekend.South Korea says it wants assurances that Pyongyang will not unilaterally close the factory zone again.Work at the Kaesong zone has been suspended since mid-April, when North Korea withdrew its workers.The move came amid high tensions after Pyongyang’s 12 February nuclear test.

The Kaesong complex, which is located just inside North Korea, is home to more than 120 South Korean factories which employ some 53,000 North Korean workers.The joint project is both a symbol of inter-Korean co-operation and a key source of revenue for Pyongyang.Sun Ho, who led the South Korean delegation, said his team would strive to accomplish “developmental normalisation” of the complex “in accordance with common sense and international rules”.

Another official at the Unification Ministry said: “The weekend marked the first step, but the difficult part starts now.”On Tuesday, a small team of South Koreans crossed into North Korea to check communication and power lines. It was the first time South Koreans had entered the zone in two months.On Wednesday, around 100 delegates, including dozens of government officials and businessmen and engineers, entered North Korea to begin formal talks.

Pyongyang has agreed to allow the businessmen to inspect their factories and retrieve finished goods.The visit is the first positive sign of thawing relations between the two Koreas in more than three months, but there are still big differences to bridge, the BBC’s Lucy Williamson in Seoul reports.Both sides blame the other for the suspension of operations at Kaesong, and South Korea is now demanding safeguards as a condition for reopening the zone, our correspondent adds.”The South wants the North to announce solid actions that will convince everyone that it has no intention of taking unilateral action to prevent movement or pull out its labourers in the future,” Sun Ho said.

“Pyongyang must take responsibility for its actions that caused considerable damage to South Korean companies with factories at the border town,” he added.Meanwhile, North Korea’s chief delegate, Park Chol-su, said he hoped both sides would “promptly proceed” with restarting the zone.”It is raining heavily, so I am very worried about those companies’ facilities and raw materials,” he said.

Pyongyang is reportedly expected to request that operations resume at once and that its workers receive higher pay.Last week, some South Korean firms threatened to abandon the zone entirely and relocate their equipment.A spokesman representing electronic and machinery makers in Kaesong had said: “Kaesong must be reopened or [the factories] have to move elsewhere”.