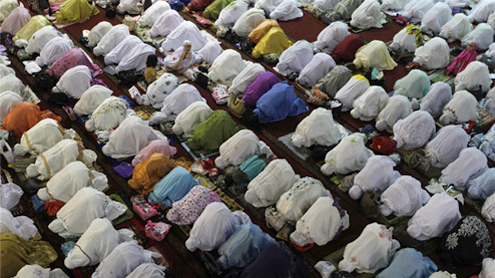 But Ramazan began in war-torn Afghanistan with a bomb blast, and there was tight security in parts of the southern Philippines after deadly clashes with rebels.In Indonesia, which has the world’s biggest Muslim population, hardliners use Ramazan as an excuse to attack nightspots and shops that openly sell alcohol. Critics say hardliners such as the Islamic Defenders Front (FPI) have been emboldened by the government’s failure to crack down on them and to prevent such attacks.

In the days before Ramazan, there were already reports that the FPI had started conducting raids.“We will take firm action against the circulation of alcohol, naked dancing and prostitution,” Habib Idrus Algadri, head of an FPI group in Depok district outside Jakarta, was quoted as saying in a local newspaper. He was leading a group of FPI members who seized bottles of alcohol from a shop at the weekend.Habib Salim Alatas, the head of the FPI’s Jakarta branch, told AFP that 50 members would be sent out to monitor nightspots in the capital every evening.

Authorities have also been making a show of cracking down on the illegal sale of alcohol.At the weekend police in Jakarta used a steamroller to crush thousands of bottles of homemade alcohol that was being sold in places without licences, as well as destroying pornographic and pirated DVDs.The start of Islam’s holiest month brought no let-up in Afghanistan’s long-running conflict, with three civilians killed and two others wounded in a Taliban roadside bombing in the southern province of Helmand, authorities said.

The Interior Ministry said that two dozen rebels had been killed in operations across the country over the past 24 hours.In the Catholic-majority Philippines, there was tight security at the start of Ramazan in southern Muslim-populated areas after weekend clashes between troops and rebels left eight dead.In Malaysia, people were looking forward to breaking their fast at markets in a country whose multiethnic make-up – it is Muslim-majority but has sizeable Chinese and Indian communities – is reflected in a vast and varied selection of food. – DailyTimes