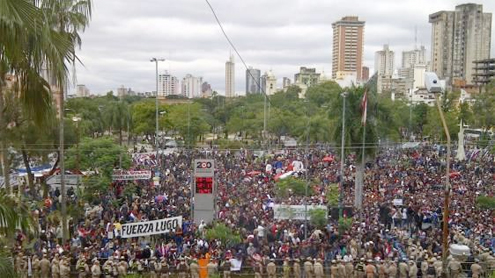 Brazilian indigenous people in the Amazon region have blocked one of the country’s most important railways in a protest for better public services.

The railway is owned by mining giant Vale and connects the world’s largest iron ore mine, Carajas, to a port on the northern coast near Sao Luis.The track transports more than 100m tonnes of the mineral each year.It is the second time this week that the trains have been halted by protesters of neighbouring villages.Protesters from several tribes burned wood on the railway in the Amazonian region of Alto Alegre do Pindare, demanding better transport, education, health and security.Last week, they blocked the railway for two days.

Earlier this week, residents of another village near Sao Luis, in the state of Maranhao, also stopped the trains in a protest.They want Vale to act on their behalf in negotiations with the authorities.Because of the protests, the passenger train that transports about 1,500 passengers a day between the city of Parauapebas, in Para, and Sao Luis has not resumed its regular service since last week.Despite having a court authorization to evict the protesters at any time, Vale chose not to enforce it, the world’s second largest mining company said in a statement.The demonstrations came about a month after several thousand Brazilians took to the streets of the country’s major cities in a wave of protests against poor public services, corruption and the cost of staging the 2014 World Cup.

Vale has faced several protests from indigenous peoples of the region in the past, more recently because of its expansion plans for the 892km-long railway.Despite court challenges and fierce criticism, work on a second line along its railway to the coast is under way.Elsewhere in the Amazon, land grabbing, illegal logging and mining conflicts are common grievances.But the giant Belo Monte hydroelectric dam project has been the focus of most protests and clashes.

The Brazilian government says it is needed to guarantee Brazil’s energy provision, especially in the Amazon region, which still relies heavily on fossil fuels.Critics say the controversial project will cause irreversible social, cultural and environmental damage.So far, however, demonstrations and court challenges have failed to prevent it from going ahead. – BBC