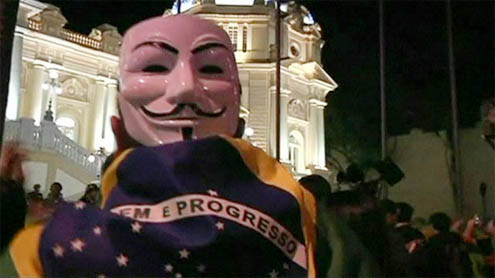 Tens of thousands of workers across Brazil joined a day of strikes called by trade unions that ended in clashes between police and protesters.

Ports and motorways were blocked, banks and schools stayed closed, and crowds marched through Rio de Janeiro, where riot police deployed tear gas.The unions want improved working conditions and better public services.The crowds were smaller than in last month’s protests, which brought more than a million people onto the streets.The June demonstrations were sparked by transport fare rises, but quickly encompassed other issues including the cost of staging the World Cup and corruption.

Those demonstrations often ended in fighting between police and protesters.Thursday’s so-called “National Day of Struggles” was largely peaceful.However, several thousand protesters clashed with police in Rio and police fired tear gas to disperse the crowds.The BBC’s Julia Carneiro in Rio says Thursday’s day of action was much more traditional than the earlier demonstrations, with trade unions and political banners prominent in the crowds.

The protesters’ demands included the reduction of working hours, more investment in health and education, and free public transport.History teacher Fernando da Costa Vieira said the event had a clearer agenda than June’s protests and put the unions back at the centre of the debate.”Here you have representatives of professors, doctors, transportation workers. These sectors had been fractured, they had forgotten their role as the vanguard of the working class,” he told the BBC.The action hit at least 10 states, bringing to a halt activities at Brazil’s busiest port, Santos, and in Itaguai, in the south, and Suape, in the north-east.

In many cities, public transport was brought to a near standstill, among them Porto Alegre, Salvador and Belo Horizonte.In Brazil’s largest city, Sao Paulo, an estimated 4,000-strong crowd again blocked the renowned Avenida Paulista.The nationwide demonstrations in June for better education, healthcare and transport prompted President Dilma Rousseff to present a package of investment and reforms in public services.Ms Rousseff also proposed a national plebiscite on political reform, but members of the Congress recently said it would be practically impossible to organise a public consultation on the issue before next year’s elections. – BBC

India is ‘ready to use’ Blackberry message intercept system

India is 'ready to use' Blackberry message intercept system