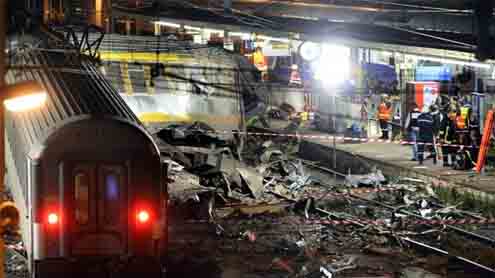 Rescue efforts are continuing to find the passengers of a train that crashed at Bretigny-sur-Orge, south of Paris, on Friday afternoon.At least six people have been killed and 30 injured, French officials say.

The intercity train had just left Paris and was heading towards Limoges when it derailed, crashing into a station platform.Investigations are getting underway into the cause of the accident, which happened at 17:14 (15:14 GMT).Rescuers have been searching throughout the night for anyone who might be trapped in the wreckage.French Prime Minister Jean-Marc Ayrault, speaking from the crash site late on Friday, said: “The toll is currently six dead, 30 injured, of whom eight are in a serious condition.”The wounded were all being treated in local hospitals, he added.

BBC Paris correspondent Hugh Schofield said there was a strong possibility that the number of fatalities could rise again because some of the victims were very badly hurt. Guillaume Pepy, president of the SNCF rail service, said six carriages had derailed during the accident. The train’s third and fourth carriages derailed first and the others followed.He expressed “solidarity” with the victims and their families, adding “rail catastrophes are something that upset the whole public”.Investigations will be undertaken by the SNCF, judicial authorities and France’s BEA safety agency.

Local media said a group of people had attempted to steal from the victims shortly after the crash, by pretending to be taking part in the rescue efforts. They reportedly threw stones at emergency workers as they tried to reach passengers.French transport routes were particularly busy at the time of the crash due to the run-up to a holiday weekend marking Sunday’s Bastille Day.French President Francois Hollande visited the scene earlier on Friday and expressed his shock at the accident.He said that the station would be closed for three days while investigations were carried out.”We should avoid unnecessary speculation. What happened will eventually be known and the proper conclusions will be drawn,” he said.

The rail company SNCF said 385 passengers were on board when the train crashed. The station platforms were crowded at the start of a holiday weekend.British student Marvin Khareem Wone was on a train on another platform when the carriages of the intercity ploughed into the station.”The train went off the railway; it just went on the platform and kind of flew in the air for a second and went upside down,” he told BBC Radio.”The first and the second coach were completely destroyed. I really thought no-one could survive that because it was completely mashed up. Everyone was crying and running everywhere. A woman was crying for her daughter who was still on the train.”
‘Images of war’

Because of the damage to the station, he said ambulances could not reach the platform and the lift was not working.Other media reports spoke of passengers being electrocuted and crushed.”I saw many wounded women children trapped inside,” Vianey Kalisa, who was waiting for his train from Bretigny to Paris, told AFP.”People were screaming. A man had blood on his face. These are images of war,” he said.The train had left Paris-Austerlitz station at 16 :53 local time and was due to arrive at Limoges-Benedictins at 20:05, SNCF said in a statement.The BBC’s Hugh Schofield says that in May, the company warned passengers that points work was being carried out in the area, where intercity and commuter lines dovetail.It is not clear if the earlier points problems are connected with Friday’s crash, he says. – BBC