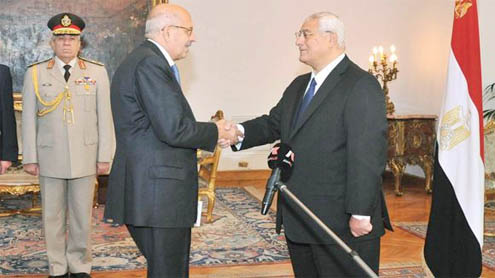 CAIRO: Investigators began questioning Egypt’s ousted President Muhammad Mursi and members of his Muslim Brotherhood on Sunday over their escape from jail during the 2011 uprising, judicial sources said.

The move came after prosecutors received criminal complaints against Mursi and other senior Muslim Brotherhood officials, and as caretaker Premier Hazem Al-Beblawi resumed talks on forming his Cabinet.Prominent liberal leader Mohamed ElBaradei, who assisted in the talks Beblawi began a day earlier with ministerial candidates, was sworn in as interim vice president for foreign relations, the presidency said.Sunday’s inquiry relates to the escape by Mursi and dozens of Brotherhood members from Wadi Natrun prison during the uprising that ended former President Hosni Mubarak’s three-decade rule.

A court in June found that the Islamist Hamas rulers of Gaza and Lebanon’s Hezbollah movement helped prisoners.State Security prosecution service investigators interviewed Mursi at an undisclosed location, the judicial sources said.Mursi, Egypt’s first freely elected president, has not been seen in public since the military coup which toppled him on July 3 after millions took to the streets calling on him to step down.Egypt’s interim leaders say he is being held in a “safe place, for his own safety,” despite calls by the United States and Germany for his release.

On Saturday, the public prosecutor’s office said it was examining complaints filed against Mursi, Brotherhood supreme leader Mohamed Badie and others, with a view to launching a formal investigation.The complaints include spying, incitement to violence and damaging the economy, although the prosecutor’s office did not say who made the allegations.Beblawi, who is seeking to form a new Cabinet with 30 ministries, said its top priorities will be to restore security, ensure the flow of goods and services and prepare for parliamentary and presidential elections.Interim president Adly Mansour had set a timetable for elections by early next year, according to a roadmap drafted by the military.The new Cabinet could be unveiled by Tuesday or Wednesday.

The Brotherhood has refused to join an interim government and tens of thousands of supporters have protested, demanding Mursi’s reinstatement.During his single year of turbulent rule, Mursi was accused of concentrating power in Brotherhood hands, sending the economy into freefall and failing to protect minorities.But his supporters say his overthrow was a military coup and an affront to democracy, and are planning more mass protests on Monday.

Demonstrators will march to the Cairo headquarters of the elite Republican Guard — the scene of deadly violence seven days earlier, Brotherhood spokesman Tareq Al-Mursi told AFP.He insisted it would be a peaceful protest.Rival protests are also planned on Monday, in Tahrir Square and at the Ittihadiya presidential palace, by the main coalition that had called for Mursi’s resignation.The July 3 coup plunged Egypt into violence.In the worst single incident, clashes outside the Republican Guard headquarters last Monday killed 53 people, mostly Mursi supporters.

Human Rights Watch called for an impartial investigation of military officers and police over the killings, “independent both institutionally and practically from the military chain of command.”“Witness after witness described the military shooting into the crowd, including at unarmed people. The government needs to find out who was responsible and ensure they are held accountable,” said HRW’s regional director Joe Stork.Washington and Berlin have both called on the military to release Mursi.

State Department spokeswoman Jen Psaki said the United States wanted “an end to restrictions on Mr. Mursi’s whereabouts.”Germany suggested the International Committee of the Red Cross should be granted access to him.Mursi supporters camping outside the Rabaa Al-Adawiya mosque, where wanted Brotherhood leaders suspected of incitement to violence are holed up, insist they will keep protesting until the ousted president is returned to power.

In a telephone call with Saudi King Abdullah on Friday, US President Barack Obama expressed “serious concern” about the violence since Mursi’s overthrow and called for the return to a democratically elected civilian government.Saudi Arabia, Kuwait and the United Arab Emirates have pledged 12 billion dollars to help Egypt’s stricken economy.Kuwait has delivered crude oil and diesel worth $200 million as part of its $4-billion aid package, a Kuwaiti newspaper reported on Sunday, citing local oil sources. – ArabNews