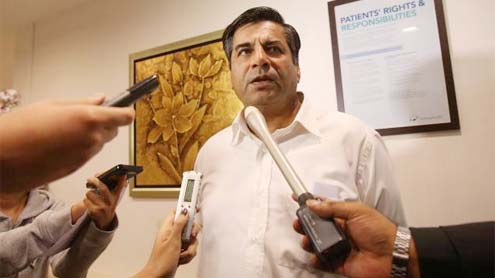 LAHORE: Newly appointed Indian High Commissioner to Pakistan Dr TCA Raghavan arrived in the city on Monday with the massage of friendly relationship between the two countries.

Dr Raghavan, who has replaced Sharat Sabharwal, reached Lahore along with his wife Ranjana Raghavan through Wagah border. He was appointed high commissioner to Pakistan on June 6.Speaking at the border, the 58-year-old diplomat said that he has come to Pakistan with the massage of peace and friendly relations between the two countries.

He said he was optimistic and hopeful that both countries would come close further to each other during his stay as high commissioner in Pakistan. Dr Raghavan has already served as deputy high commissioner in Pakistan from 2003 to 2007. He has also been in charge (joint secretary) of the Indian Desk handling affairs related to Pakistan, Afghanistan and Iran (PAI) in the Indian Ministry of External Affairs.

As per diplomatic protocol, the new Indian high commissioner will present a copy of his credentials to President Asif Ali Zardari when the latter returns to Pakistan from a foreign tour. Dr Raghavan is a batch officer of Indian Foreign Service (IFS) 1982 and has already served on key diplomatic assignments in Kuwait (1983-1986), Bhutan (1992-1995), England (1995-1998) and Singapore. Before his appointment in Pakistan, he was Indian high commissioner in Singapore. – DailyTimes