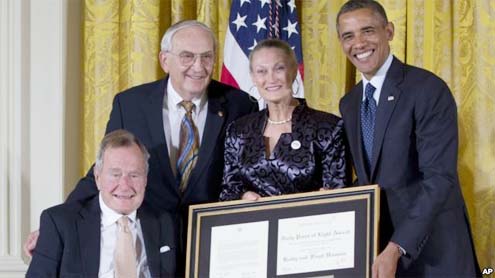 WHITE HOUSE: Former U.S. president George H. W. Bush was back at the White House Monday for an event recognizing the work of a volunteer service organization he founded in 1989.  “Bush 41,” as he is known, and President Barack Obama honored a couple for their volunteer work tackling global hunger.

George Herbert Walker Bush visited the Obama White House last year, and in 2011 he received the Presidential Medal of Freedom, awarded to recognize “Bush 41’s” commitment to public service.As the nation’s 41st president in 1989, Bush established the Points of Light Foundation, dedicated to his lifelong passion of expanding volunteer service and encouraging individuals to spark change.

On Monday he returned with former first lady Barbara Bush, to join President Barack Obama in honoring recipients of the 5,000th Point of Light Award.Growing out of anti-AIDS work in Tanzania, a non-profit company that Iowa couple Floyd Hammer and Kathy Hamilton started provides free meals to hungry children around the world.

“Outreach has distributed free meals to hungry children here in the U.S. and more than 15 countries worldwide.  To date, more than 233 million meals.  They have gotten to see many of the kids that they met grow up healthy and strong,” Obama said. “This work they say is the most rewarding thing they have ever done.  And I have to say that having just been to Tanzania with Michelle, we can attest to how important this kind of work is, how it changes lives.”

Kathy Hamilton spoke about the importance of volunteerism.”As we have seen time and time again, when people give of themselves, when they share the burden and they share the task of solving it, life shines, love grows, all over the world, and here at home.  Thank you so much,” she said. Obama, the 44th president, and “Bush 41,” who was in a wheelchair during Monday’s event, last saw each other in April at the dedication of the George W. Bush presidential library in Dallas, Texas.

Obama recognized steps the former president took to strengthen the tradition of service, including creating the first White House office dedicated to promoting volunteerism.”Thanks to those programs and others like them and thanks to the passion of leaders like President Bush and citizens who found the same passion over the years, volunteerism has gone from something some people do some of the time to something lots of people do as a regular part of their lives,” he said.

Former president Bush spoke briefly. “First I, of course, thank President and Mrs. Obama for this wonderful hospitality.  It is like coming home for Barbara and me, with the rest of you, just coming to this magnificent house, and being greeted by this superb hospitality, knows no bounds,” he said. Obama has made volunteerism a major theme of his presidency.  He said he was one of millions who were inspired by Bush’s passion and commitment, and “how bright a light you shine.”The president also used Monday’s event to announce a new federal task force designed to increase public and private sector cooperation to support his goal of expanding national service.In 2009, Obama signed legislation to triple by the end of 2017 the size of the AmeriCorps volunteer service program created under former president Bill Clinton. – VOA