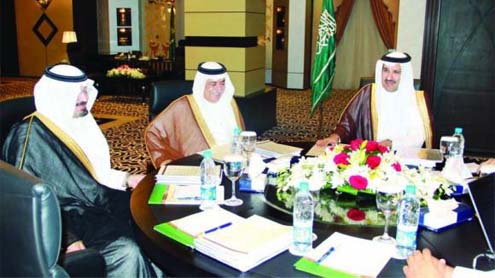 Madinah will have a major facelift shortly as plans have been made for its comprehensive development by implementing a number of projects including a metro system to meet the requirements of the city’s growing population and visitors.

Madinah Gov. Prince Faisal bin Salman held talks with Finance Minister Ibrahim Al-Assaf along with Madinah Development Authority’s council members to develop the city’s public transport system.“The governor has instructed to complete the project study quickly in order to present it to higher authorities for approval,” a senior official said.
“The transport project is an important component of a comprehensive development plan for Madinah,” he added.

The transport system includes a metro network and speedy bus services, in addition to parking facilities, fuel stations, maintenance centers and smart systems.It is designed to provide quick access to the Haramain Railway that links Makkah and Madinah.“The transport project will be carried out by phases following international standards,” said the official.

King Abdul Aziz Road, Hijrah Road and Al-Salam Road will also be developed as part of the project, which coincides with the Prophet’s Mosque expansion project.Prince Faisal and the council members also discussed matters related to the mosque expansion project, especially the acquisition of land and demolition of hotels and buildings near the mosque, stressing the need to make alternative arrangements to meet shortage in housing facilities.

The council was weighing various options, including quick implementation of the newly planned pilgrim city to be established on an area of 1.6 million square meters along Hijrah Road with a capacity to house 200,000 pilgrims.State-owned Public Investment Fund will finance the pilgrim city project, which includes a railway and bus station, offices of government agencies and a 400-bed hospital. – ArabNews