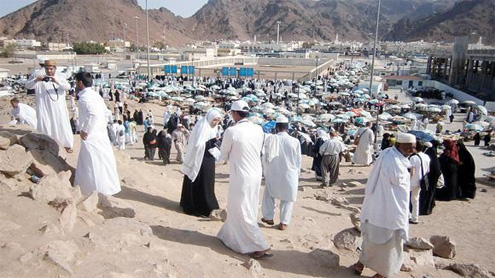 Uhud in Madinah was the scene of one of the most significant battles in early Islamic history, when the Muslim forces under the Prophet (peace be upon him) battled the forces of the unbelievers.

Today, this important site not only attracts many Muslims from all over the world, but also many people wanting to make money.There are vendors and kiosks everywhere. They are on the site of the battlefield between Rumah Mountain and the martyrs’ cemetery. They sell everything from scrap and hardware to exotic herbs with strange names that are very popular with Pakistanis, Indians and Indonesians.

Rumah Mountain is the place where the Prophet (peace be upon him) ordered 50 men, including his uncle Hamzah, to stay regardless of the outcome of the battle. But when they thought the Muslims were winning, they deserted the post. This allowed soldiers led by Khalid ibn Al-Walid, who was not a Muslim at the time, to storm and occupy the place.There are many photographers here who take instant photographs of visitors who want these as souvenirs.

Khalid Al-Mutrifi, a photographer, said many visitors like their photographs taken with the mountain in the background.“A single photo costs SR10 and two for SR25. However, many visitors now have their own sophisticated smartphones and digital cameras that allow them to take as many pictures as they want. Business is not what it used to be, although instant photos are still popular with some people. My daily income is anywhere between SR200 and SR300,” Al-Mutrifi said.

During Arab News’ tour, many visitors complained of the large numbers of beggars. “They are all over the place,” one visitor said. When the Arab News photographer tried to take pictures of some of them, they either hid their faces or walked away.Uhud Mountain is 2 km from the Prophet’s Mosque. It houses the tomb of many martyrs, including the Prophet’s uncle.

Despite the vendors, the oppressive heat of over 46 degrees Celsius (115 degrees Fahrenheit) and Ramadan, visitors arrived in droves to see the site.Ahmad Tameem and Husain Murad from Iraq said they wanted to see Uhud firsthand and to understand what the early Muslims had gone through in those days. Tameem said the “feeling of joy and elation was indescribable.” – KhaleejNews