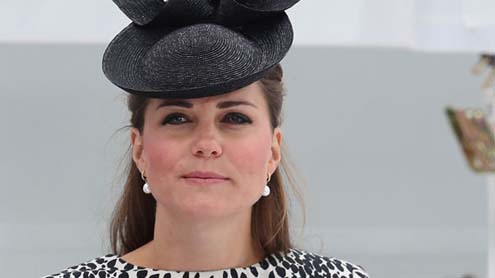 The Duchess of Cambridge has been taken to hospital in the early stages of labour, Kensington Palace has said.

She travelled by car from the palace to St Mary’s in Paddington, west London, with her husband the Duke of Cambridge.The couple do not know the sex of their first child, who will be third in line to the throne.”Things are progressing as normal”, said a spokesman. The next official announcement is likely to be that of the birth.The world’s press have been camped outside St Mary’s for days in anticipation of the birth. The due date had never been officially announced but had widely been expected to be mid-July.

Royal vehicles were seen at a back entrance to the hospital at about 06:00 BST, with the announcement coming from Kensington Palace an hour-and-a-half later.The couple travelled to the hospital without a police escort, their spokesman said.The duchess is being tended by a top medical team led by the Queen’s former gynaecologist Marcus Setchell, who delivered the Countess of Wessex’s two children.Assisting him is Alan Farthing, the former fiance of murdered TV presenter Jill Dando and the Queen’s current gynecologist.

She will give birth in the hospital’s private Lindo wing, where Prince William and his younger brother Prince Harry were born.There is a strong police presence around the hospital and two police officers are guarding the entrance to the private wing.BBC royal correspondent Peter Hunt said the duchess was thought to be one week past her due date.”The royal statement contains 45 words. All there will be to sustain the world’s media until the baby is born,” he tweeted.

Last week, the Queen joked about the imminent arrival of the newest member of her family, saying she hoped the baby was born before she went on holiday to her private Balmoral estate in Scotland.The Duke of Cambridge has been with his wife on annual leave and will have two weeks’ paternity leave from his job as an RAF search and rescue helicopter pilot.It is believed the next time the couple will be seen in public is when they appear on the steps of the hospital with their baby.

The way the birth will be announced is steeped in tradition. It is custom for news of royal births and deaths to be attached to the railings of Buckingham Palace, but in this case it will be displayed on an ornate easel in the forecourt of the palace.The Queen, senior members of the Royal Family, and the duchess’s family – if they are not at the hospital – will be told about the birth first. Then a royal aide will take a bulletin, signed by key medical staff, from the hospital to the palace under police escort.After the note is displayed, an announcement will be posted on Twitter and Facebook, and the media will be informed.

Under new laws to succession the baby will remain third in line to the throne regardless of gender, and the gender of any subsequent siblings.The new royal baby will be the Queen’s third great-grandchild. It will be expected to take the throne following reigns by Prince Charles and then Prince William.The couple announced they were expecting their first child in December after the duchess was admitted to hospital suffering from severe morning sickness.

Since the announcement, the duchess has carried out 19 days of public engagements before going on maternity leave in the middle of June.Catherine’s final public appearance before the birth was at the Trooping the Colour ceremony in June.The Duke and Duchess of Cambridge were married at Westminster Abbey in April 2011, watched on television by hundreds of millions of people around the world. – BBC