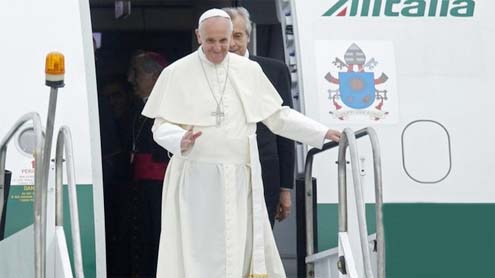 Pope Francis has been greeted by tens of thousands of Brazilian pilgrims as he began his first trip abroad since becoming head of the Catholic Church.

The first Latin American Pope toured Rio de Janeiro in an open car and then met President Dilma Rousseff at the state governor’s palace.After he left, police fired tear gas to disperse protests against both the government and the cost of the visit.He is in Brazil to attend the Roman Catholic World Youth Day festival.In a speech soon after his arrival, the Pope urged young Catholics to “make disciples of all nations”.”I came to meet young people coming from all over the world, drawn to the open arms of Christ the Redeemer,” he said at the governor’s palace, referring to Rio’s famous vast statue of Jesus.

“They want to find a refuge in his embrace, right near his heart to hear his call clearly and powerfully.”About an hour after the welcoming ceremony, police fired stun grenades and tear gas against the demonstrators outside the palace.It was the latest rally against what the protesters described as endemic government corruption across the country.But some were also unhappy about $53m (£34m) in public fund being spent for the pontiff’s visit.There was little damage and few arrests, but it was a reminder that there is still a real possibility the pontiff’s high-profile visit to a huge Catholic festival in Rio could be overshadowed by political events, the BBC’s Wyre Davies reports from Rio.

In a separate development, the military said a homemade explosive device had been discovered at a shrine between Rio and Sao Paulo that the Pope is due to visit on Wednesday.The device at the Shrine of Our Lady of the Conception of Aparecida was described as being “of low power” and was destroyed.As Pope Francis disembarked from the Alitalia plane in Rio’s airport earlier on Monday, he was welcomed by President Rousseff to cheers and applause from the waiting crowd. A choir sang an anthem linked to Youth Day and he was presented with a bouquet of flowers.

The Pope waved before being taken by motorcade to the centre of Rio, where thousands of pilgrims have gathered.Pope Francis looked relaxed and jovial as he was driven into Rio de Janeiro in a modest family car, with the window wound down and security officials struggling to keep back the crowds, our correspondent says.There were chaotic scenes as his car became stuck in one of the city’s infamous traffic jams, after the pope’s driver reportedly took the wrong turn and missed lanes that had been cleared by the security services. Crowds immediately gathered round the vehicle hoping to catch a glimpse or touch Pope Francis. One woman passed her baby through the window for a kiss from the Holy Father.

Once in the city centre, the Pope switched to an open-air Popemobile, waving at the tens of thousands who lined the streets he travelled through.”I can’t travel to Rome, but he came here to make my country better… and to deepen our faith,” said a tearful 73-year-old Idaclea Rangel.The authorities have increased security during the Pope’s seven-day visit, following weeks of nationwide protests against corruption and bad governance. Pope Francis refused to use an armoured Popemobile, despite requests from Brazilian officials. Some 30,000 security staff – army and police are on duty throughout his visit.

More than a million young Catholics are expected to gather in Rio for World Youth Day, which takes place every two years, and is a celebration of the Catholic faith.The Argentina-born Pope – who became head of the Catholic Church in March – is due to lead a prayer service on Copacabana beach on Thursday. He will also visit one of Rio’s shanty towns.

Speaking to reporters on his flight from Rome, the Pope said young people were “at this moment are in crisis,” in an apparent reference to the continuing economic crisis across Europe.”We run the risk of having a generation that hasn’t worked,” he said, even though work confers dignity.He also criticised what he said was a “culture” of socially rejecting the elderly who were “thrown away” as if they had nothing to offer. – BBC

Umrah season given a clean bill of health