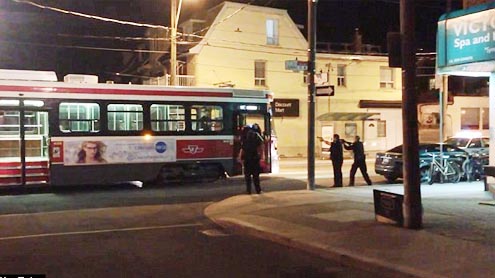 A Toronto police officer fired nine shots in 13 seconds at a young man wielding a knife in an empty streetcar killing him on the spot, police said Monday.

Hundreds in Canada’s largest city protested the shooting that was caught on video and posted on YouTube. Some protesters called it unnecessary police force, and a former Toronto police detective who saw the video said it appeared that ‘excessive’ force had been used. Investigators were looking into the circumstances surrounding the shooting, the city’s police chief said.The video shows 18-year-old Sammy Yatim holding a knife inside the streetcar early Saturday, with police outside. Yatim goads police while officers yell, ‘Drop your knife!’

Shortly after, three shots are fired. After a pause, six more shots are fired. A Taser is later used on Yatim.Ontario’s Special Investigations Unit, which is charged with carrying out independent investigations of police shootings, is examining the shooting. The SIU says Yatim died from multiple gunshot wounds.Toronto police spokesman Tony Vella confirmed the officer involved has been suspended with pay.Toronto Police Chief Bill Blair said he’s seen the video and is conducting a parallel investigation. He said he understands the public’s concern.

‘I recognize there is a need for answers,’ Blair said.Mark Mendelson, a former Toronto police detective, said investigators have the benefit of the video, which ‘doesn’t lie.’’If you look at it on its face value at this point, it’s not hard to come to the conclusion that excessive force was used,’ Mendelson said.Mendelson also noted there are numerous civilian witnesses and at least two video angles of the shooting, including security camera footage.

Hundreds took part in a march Monday evening that called for justice for Yatim and an end to police violence.Toronto Police Association president Mike McCormack, who leads the police union, said the officer involved in the shooting is ‘devastated.’‘He’s just overwhelmed by the magnitude of everything,’ he said. McCormack added that the public shouldn’t jump to conclusions before investigators collect all the facts. – DailyMail