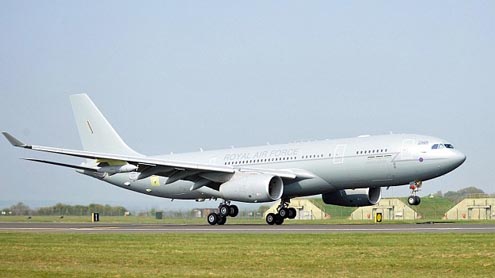 Hundreds of battle-weary troops flying home from Afghanistan endured a 48-hour delay at a sweltering Middle East airbase because of a farcical row over an aircraft’s spare tyre.

Box-ticking military chiefs refused to allow the RAF Voyager’s crew to swap a punctured tyre with one from a nearby international airport – because it would breach a £10.5billion private-finance deal.Instead, top brass sent a team of engineers with a new wheel on a 3,400-mile trip from the UK to the Gulf.It meant more than 250 soldiers desperate to see their families after six month fighting the Taliban were forced to twiddle their thumbs at the base until the replacement arrived.

Some servicemen were even forced to cancel their eagerly-awaited summer holidays because of the hold-up.One soldier said: ‘It was an absolute disgrace. The guys were furious. We were fobbed off with one excuse after another.’It was only a flat tyre. The aircrew said it would have taken an hour to change and yet it ended up taking two days. There was almost a mini-riot.’The fiasco happened on July 16 as the troops, including 100 members of the Royal Artillery, travelled from Kandahar to RAF Brize Norton in Oxfordshire, via the United Arab Emirates.

As they prepared to depart Al Minhad Air Base, the Voyager was suddenly forced to abort take-off after striking a bird.A check of the stricken £150million transport plane revealed the collision had punctured a tyre.The disgruntled troops – already three days late returning to Britain because of a broken-down plane in Afghanistan – were herded into huts where temperatures touched a stifling 42C.Because the Voyagers are militarised versions of the Airbus A330-200 passenger jets, the RAF crew tried to source a new tyre from an international airport in Dubai.

Astonishingly, senior military officers in the UK refused permission. Passengers were told this was because it would invalidate the aircraft’s warranty under a private-finance project signed with the Air Tanker consortium in 2008 – costing the Ministry of Defence extra money.The deal, where the Government repays the cost of planes over 27 years, states all repairs must be carried out by engineers based in the UK.Yet one of the reasons the RAF selected the A330-200 Airbus was because spare parts were available all around the world.

The soldier told the Mail: ‘We were told that the aircrew we trying to source a tyre locally and we should be back in the air in a few hours.’Then the message came through that the RAF engineer chain of command had refused permission, claiming it could invalidate the warranty.’There was a real protest. A lot of people were very frustrated, very angry.’Some of the guys on board were returning to the UK to go on family holidays and were going to miss them.

‘The story kept changing with every briefing we were given. One minute we were going to get spare tyres locally and the next we weren’t.’No one could believe it. What is the point of having a strategic aircraft which can only be repaired in the UK. It’s an absolute nonsense.’The incident is the latest problem to hit the Voyagers, which were acquired by the previous Government for air-to-air refuelling and transporting troops.Three years ago the MoD’s deal to buy the planes from AirTanker was condemned as ‘not value for money’ by MPs on the Commons’ Public Accounts Committee.

And last year it emerged that the planes were failing to refuel RAF fighter jets.Technicians had to work out how to stop leaks that occurred when the pipes of the giant Voyagers were attached mid-flight to RAF Tornados to fill them up at the rate of 5,000 litres a minute.The MoD was also blasted by the National Audit Office, Britain’s spending watchdog, for ‘astonishing failures’ because the planes cannot be flown in warzones as they lack proper protection.

An MoD spokesman said: ‘We understand how much the chance to see loved ones means to our personnel and that is why any leave lost will be given back in line with standard policy.’While we of course try to get service personnel home as quickly as possible, unforeseen circumstances can cause delays and safety has to be a priority. ‘Flying replacement tyres out from the UK on the next available aircraft was the quickest solution available.’ – DailyMail

‘I am private eye who spied for financiers protected by police’

'I am private eye who spied for financiers protected by police'