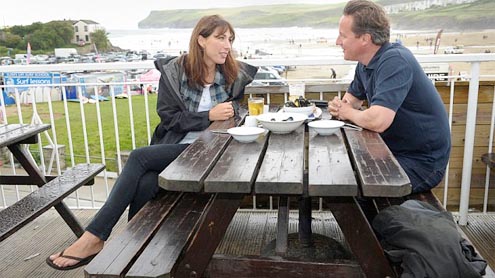 It's holiday time again for Cameron

David Cameron is heading off on a second summer break today.The Prime Minister, his wife Samantha and their three children, are heading to the Scottish islands for a weekend with friends.

Mr Cameron is due to be away from Westminster for another week.On Monday he and the family are due to travel from a remote part of the Western Isles to Cornwall, where he will spend the rest of next week.The Cornish break is a traditional feature of the Cameron summer and daughter Florence was born during the family holiday in 2010 when Mrs Cameron went into labour unexpectedly.This is the second summer break for the Prime Minister after he spent a fortnight in the Portuguese town of Aljezur on the Algarve.

In June the Camerons spent a week at an £11,000 a week villa in Ibiza, where Mrs Cameron enjoys the local nightclub music scene.Downing Street officials said Mr Cameron will be staying at ‘private houses; in both Scotland and Cornwall.Nick Clegg is taking breaks in Spain and France and Labour leader Ed Miliband has just returned from a break in France.The Prime Minister headed to teh Scottish islands yesterday after a day visiting one of the main sites for the 2014 Commonwealth Games in Glasgow.

He pledged to bring all his Cabinet team to Scotland later this year to ‘take stock’ of the preparations.Next year will also see Scots vote on the country’s future in the independence referendum.Mr Cameron said: ‘What we have to do is to get a clear and decisive answer to the question the SNP have always wanted to put – do you want to break up the United Kingdom or do you want to stay in the United Kingdom?’ He said he believed those who supported the union were ‘winning the argument for keeping the United Kingdom together’. – DailyMail