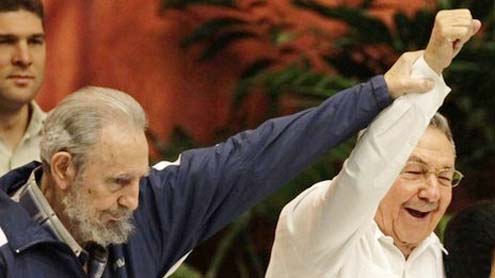 Former Cuban leader Fidel Castro has said that he decided to step down and transfer power to his younger brother, Raul, because he was diagnosed with a fatal illness in 2006.

In an article published to mark his 87th birthday, Fidel Castro said he didn’t expect to survive the stomach ailment and live for so long.”I was far from imagining that my life would extend for another seven years.”Mr Castro had been in power since the Cuban Revolution in 1959. The long article was only published by official newspaper Granma on Wednesday, a day after his birthday.

Mr Castro left office for treatment in 2006 but only formally resigned as commander-in-chief and president of Cuba in February 2008.”As soon as I understood that it would be definitive, I did not hesitate to cease my charges as president,” he said in the article.Mr Castro also revealed that Cuba had received weapons from North Korea in the early 1980s.The North Korean weapons shipment was provided after Soviet leader Yuri Andropov warned that his country was no longer prepared to step in to defend the communist-run island.

“He told us that if we were attacked by the United States we would have to fight alone,” wrote Mr Castro.The Soviet Union renewed its commitment, however, to continue providing weapons to the island.But Cuba decided to gather weapons from “other friends” to arm “one million Cuban fighters.””Comrade Kim Il Sung, a veteran and exemplary soldier, sent us 100,000 AK rifles and accompanying ammunition without charging a penny,” writes Mr Castro.The North Korean leader, who was succeeded by his son, died in 1994.

The revelations come as a team of United Nations experts investigate an incident in the Panama Canal involving a North Korean ship carrying an undeclared shipment of weapons from Cuba.The ship was seized last month on suspicion of carrying drugs, but Panamanian officials found weapons – including two Soviet-era combat jets – stashed under bags of sugar.Cuba came forward saying the “obsolete weapons” were being sent to North Korea to be repaired.Panama called in the UN to investigate if the shipment breached sanctions imposed on North Korea over its nuclear programme. – BBC