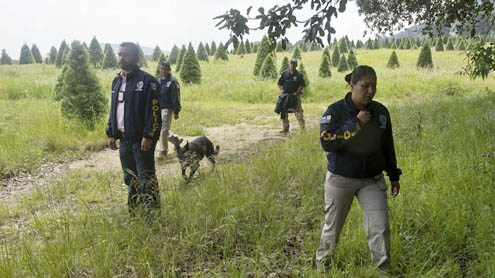 Authorities searched a mass grave near Mexico City as anxious relatives braced to learn whether the remains were those of 12 young people kidnapped in May.

Mexico City’s top prosecutor, Rodolfo Rios, said the decomposed bodies of seven people have been recovered since the search began in a park on Wednesday. Workers were still digging the muddied pit.Rios said it would take at least two days to get DNA test results to identify the victims, adding more suspense to a case that has shocked the capital.

Those kidnapped, aged 16 to 34, were taken from a downtown bar in broad daylight on a Sunday morning three months ago in a case that raised concerns about security in Mexico City, challenging the perception that it is relatively immune from the country’s drug cartel violence.The mass grave was discovered at the Rancho La Mesa ecological park in the municipality of Tlalmanalco, a mountainous area of pine trees, corn fields and humble rural homes 30 kilometers (19 miles) southeast of the capital.

A federal police officer at the scene told AFP that authorities had searched a ranch for weapons on Wednesday and found firearms in a parked trailer when they happened to find a stretch of land covered in cement.”We began to dig and found the bodies,” he said.One kilometer from the grave, police blocked access on a dirt road surrounded by corn fields. Some relatives of victims were there with an attorney and one woman was seen sobbing but refused to speak.In the capital, other anxious relatives stormed Rios’s press conference to demand answers. They also met privately with him.

“The excavation continues to check if there are more bodies,” Rios told reporters.The aunt of 16-year-old abductee Jerzy Ortiz, Eugenia Ponce Ramos, later said in an interview that the families were “distressed due to the uncertainty.”An official from the federal attorney general’s office said the remains were mere bones, making it difficult for now to determine the cause of death or even whether they were male or female.A lawyer representing some victims’ relatives, Ricardo Martinez, said a police officer who was at the site told him that 13 bodies were found after the two detainees took authorities to the grave.

“According to the people who spoke with me and others I spoke with, I wouldn’t doubt that it is them,” Martinez told Milenio television in reference to the kidnap victims.Rios said two people who live near the site were detained, but Attorney General Jesus Murillo Karam denied that anybody was held, adding that the discovery was made during a guns search.Prosecutors have linked the mass kidnapping to a dispute between two small gangs known as La Union and Tepis, which sell drugs in the city’s rough Tepito neighborhood.

But Mexico City Mayor Miguel Angel Mancera has insisted that the bigger cartels do not operate in the capital and initially classified the disappearances as a missing persons case. Mass kidnappings and murders are more common near the US border and western states.Former Mexico City police chief Manuel Mondragon y Kalb, who now heads the federal police, said last month that the country’s main gangs have “crystallized” in some areas of the capital.

Most of those abducted hail from Tepito and two of them, including Jerzy Ortiz, are sons of jailed criminals. But their families insist that the youngsters are not involved in criminal activities.The group was whisked away by 17 men who walked into the Heaven bar on May 26 and put them in several cars, just blocks away from a police building, the US embassy and the city’s iconic Angel of Independence monument, officials said.Two bar owners have been arrested, while the charred remains of a third associate was found in the central state of Morelos last month. – YahooNews