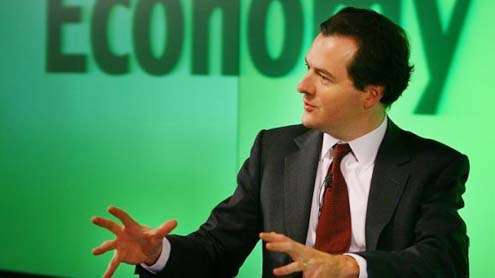 George Osborne last night declared that Britain ‘is on the right track’ after figures showed the economy is growing faster than previously thought.

Output rose by 0.7 per cent between April and June, according to the Office for National Statistics.This is better than the 0.6 per cent  initially reported and more than double the 0.3 per cent seen in the first three months of the year.Economists said the UK is finally  ‘firing on all cylinders’ five years after a debt-fuelled boom turned to bust. But they warned that the improving outlook could force the Bank of England to raise interest rates sooner than planned as unemployment falls.Rates have been held at a record low of 0.5 per cent since March  2009 and it is feared an early  hike will push 30,000 borrowers struggling with their mortgages to the wall.

Bank of England governor Mark Carney this month pledged not to raise rates until unemployment falls from the current level of 7.8 per cent to 7 per cent or lower – something he does not expect until the end of 2016.But City analysts said the spurt in the economy could mean rates rise far sooner than that.James Knightley, from ING,  said: ‘The first Bank of England rate hike is more likely to come  in early 2015.’ Chris Williamson,  of research company Markit, said: ‘The Bank of England is facing a growing challenge of how to convince the markets and households that interest rates will not need to rise over the next three years.’

The figures were welcomed by the Chancellor who has declared that Britain ‘is moving from rescue to recovery’.A Treasury spokesman said: ‘There is still a long way to go, but the economy is on the right  track and the Government is  committed to its economic plan that has already cut the deficit by a third and enabled the private  sector to create over 1.3million  new jobs.’The ONS report showed that growth was driven by all areas of the economy with manufacturing and exports up strongly.

Rob Wood, UK economist at Berenberg Bank, said he expects growth to pick up to 0.8 per cent in the third quarter of the year as troubles ease in the eurozone and record low interest rates bolster confidence in Britain.He now expects interest rates to rise at the end of 2015.Richard Sexton, at online surveyors e.surv, warned: There are a block of 30,000 or so borrowers in severe mortgage arrears who have been teetering on the brink of having their homes repossessed.‘If rates rise, repossessions are likely to rise significantly.’ – DailyMail