Mexico’s ‘Queen of the Pacific’ deported from U.S. 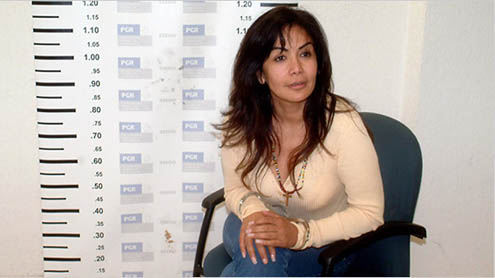 Mexico's 'Queen of the Pacific' deported from U.S.

Sandra Avila Beltran, known as the “Queen of the Pacific” for alleged drug dealings, was deported Tuesday from the United States to Mexico, where she will face money-laundering charges, the third set of criminal accusations against her.

Avila landed in Mexico City on a chartered plane from El Paso, Texas, along with other deportees, the Mexican attorney general’s office said.She was being held in a hangar belonging to the attorney general’s office, where she will be served with an arrest warrant, the state-run Notimex news agency reported. She will undergo a medical exam before being transported to the state of Jalisco, where she faces charges of money laundering, according to Notimex.

Avila’s name stands out on the list of accused leaders of Mexico’s male-dominated drug trade. The 52-year-old’s life is the subject of a best-selling book and a popular ballad. She was dubbed Queen of the Pacific because the smuggling routes she is alleged to have controlled brought drugs from Colombia to Mexico along the Pacific Coast.Avila’s lawyer, Stephen Ralls, told CNNMexico last week that Avila is “optimistic” about facing what will be her third judicial process, after being exonerated in her first trial in Mexico and having reach a plea deal in her second case in the United States.

A federal court in Miami in July sentenced Avila to 70 months in prison for helping a Colombian drug lord, but under the plea deal the judge ruled that her time served in Mexico and in the United States was enough to complete her sentence. The judge ordered her deportation.Avila was first arrested in Mexico City on September 28, 2007, smiling before cameras as authorities trumpeted her detention. Mexico’s case against her drew widespread attention as it made its way through the nation’s courts.

After her acquittal, authorities extradited her last year to the United States, where she was accused of conspiring to smuggle cocaine along with Juan Diego Espinosa Ramirez, a Colombian national who was also known as “The Tiger.”Avila denied the charges. And despite the high-profile accusations against her, authorities have not convicted Avila of any direct drug-trafficking crimes. The U.S. conviction was for being an accessory after the fact. – CNN

Khamenei: Outsiders to blame for ME woes

Khamenei: Outsiders to blame for ME woes