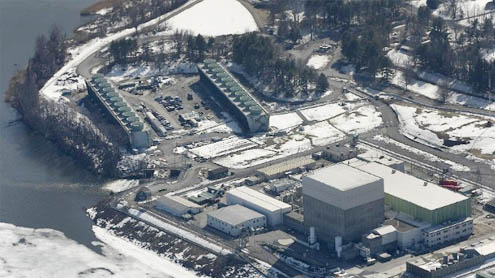 “This shutdown decision was made because this asset is not financially viable,” owner Entergy Nuclear Vermont Yankee LCC said in a statement.The 40-year-old plant, which employs 630 workers, is in Windham County on the Connecticut River, near the border with Massachusetts.During decommissioning, a process that could take decades to complete, fuel will be transferred to storage, Entergy said.Entergy said decommissioning is expected to cost $566 million, but its decommissioning trust contains $582 million.

The plant’s boiling water reactor, made by General Electric, uses river water as a cooling source and is licensed to operate through 2032.Vermont Yankee had been the subject of a battle between state authorities and the Nuclear Regulatory Commission over its GE-designed containment housing known as the Mark 1, one of 23 such reactor housings in the United States.That was the design used at Japan’s Fukushima Daiichi nuclear power plant, where three reactors melted down after the station was struck by the tsunami that followed an earthquake in March 2011. The disaster resulted in the widespread release of radioactive contamination that forced more than 100,000 people from their homes.

Japan fed up with ‘whack-a-mole’ approach to Fukushima

The Nuclear Regulatory Commission rejected a petition by anti-nuclear groups to shut reactors using the GE Mark I containment.Japan will need decades to clean up after Fukushima Daiichi, the world’s worst nuclear accident since Chernobyl in 1986.The U.S. nuclear industry hasn’t built a new reactor since the 1970s. But on February 9, the commission approved two new reactors at the Vogtle nuclear plant in Georgia. The reactors differ from those at the GE plants at Fukushima Daiichi and in the United States.

National Energy Institute President and CEO Marvin Fertel called the closure “a great loss to the state of Vermont, the regional economy and consumers and the environment.”But the Vermont plant’s finances have dimmed in recent years, as widespread drilling for shale gas has lowered the price of natural gas.A 2008 post that is still on Entergy’s website predicted that “the continued operation will result in over $2 billion in additional income for the residents of Windham County and the state of Vermont as well as increased tax revenues for the state in excess of $300 million in today’s (2008) dollars.”

At the time, Vermont Yankee was supplying nearly a third of the electricity used in the state.But the company said Tuesday that it had spent more than $400 million in operating costs since 2002.”The announcement today by Entergy that it will shutter the troubled Vermont Yankee reactor is the latest — but certainly not the last — domino to fall for the failing U.S. nuclear power industry,” said Mark Cooper, a senior fellow for economic analysis at the Institute for Energy and the Environment at Vermont Law School.

He noted that Tuesday’s announcement follows the August 1 announcement by Duke Energy that it is abandoning its reactor project in Levy County, Florida, and that the French-subsidized nuclear giant EDF was pulling out of the U.S. nuclear power market “due to the inability of nuclear power to compete with alternatives and the dramatic reduction in demand growth caused by increasing efficiency of electricity consuming devices.”

He cited the recent closures of four other nuclear reactors: two at San Onofre in California and one each at Kewaunee in Wisconsin and Crystal River in Florida.”What we are seeing today is nothing less than the rapid-fire downsizing of nuclear power in the United States,” he wrote. “It is important to recognize that the tough times the U.S. nuclear power industry faces today are only going to get worse.” – CNN

Mexico’s ‘Queen of the Pacific’ deported from U.S.

Mexico's 'Queen of the Pacific' deported from U.S.